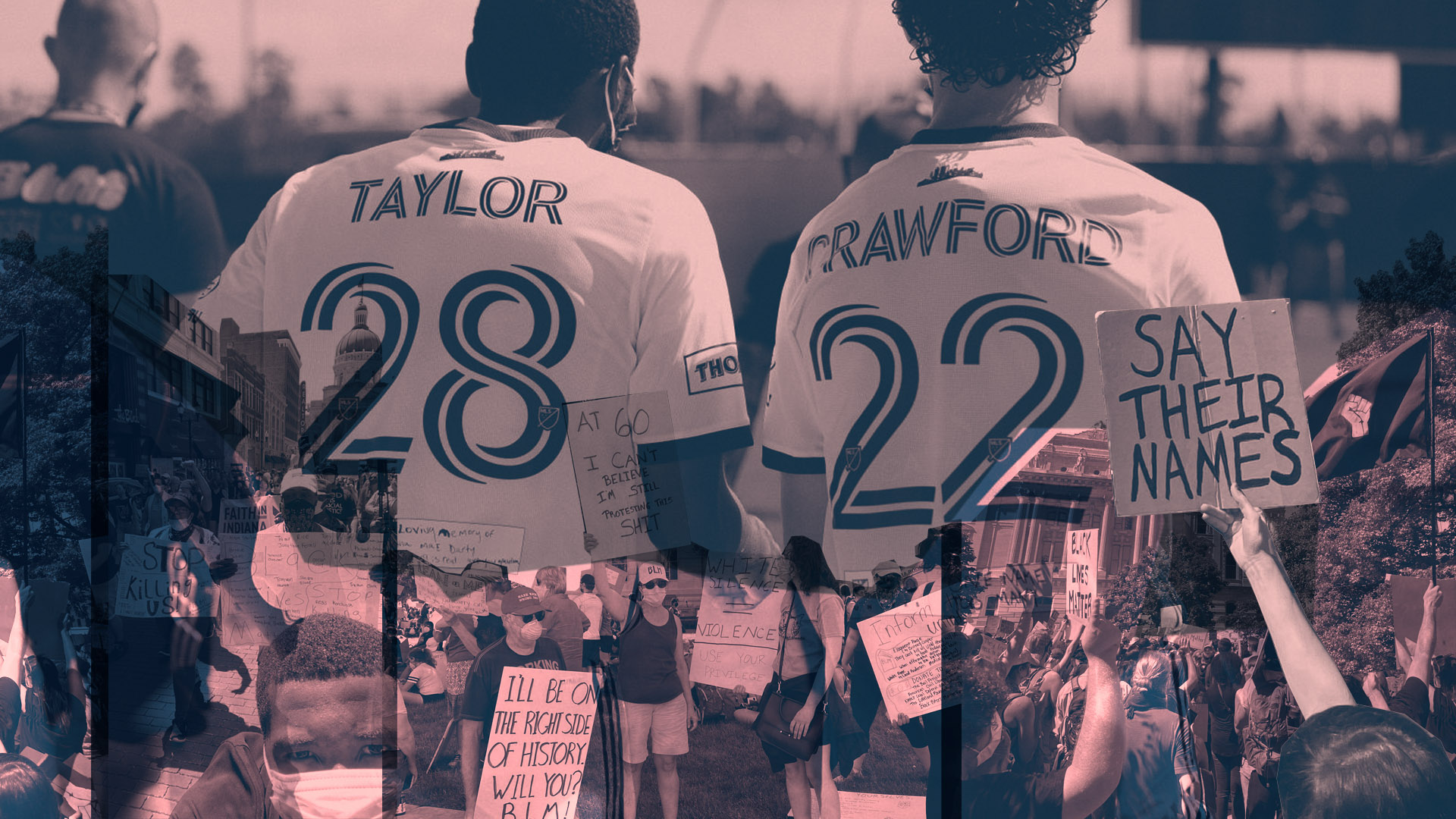 In July, I went to Disney World.

Not for the Magic Castle or a photo with Mickey—I was there to play soccer. And though few knew it at the time, my teammates and I were also there to make a statement.

Let me take a step back. My ninth year with the Philadelphia Union has been a year like no other. The COVID-19 pandemic has crippled the nation, and in the midst of it another, far more familiar pandemic resurfaced: Racism. The late George Floyd’s death due to police brutality—excessive force applied to a scared man, a knee to the throat for eight minutes and forty-six seconds—brought people to mourn while expressing themselves in protest and other manners of activism. And it set in motion a series of events that would lead my teammates and me to use our platform to spotlight the inequality and injustice directed toward African-Americans. Before jumping into the stance the team I took I want to state that racism and discrimination are everywhere within our society, and there’s nothing at all controversial about that statement. Racism is a pervasive, uncomfortable reality that is deeply rooted in every layer of American society.

As we prepared to spend over a month sequestered at the Swan and Dolphin Hotel in Orlando, leaving only to train and play at the ESPN Wide World of Sports Complex, the team began a meaningful dialogue about inequality and cross-cultural differences. We shared perspectives and sought to understand how we all felt. Teammates shared testimonials, stating that the realities of their black teammates differed from their own and expressing how important it was to them to speak out about racism and injustice. Warren Creavalle, Mark McKenzie, and myself believe that as black men and professional athletes, we needed to use our platform to amplify a message for the voiceless.

It had been almost four months to the day since we had played a meaningful game.

And when we kicked off on July 9, we would be one of the only leagues back in action; ESPN would broadcast our match against NYCFC live across the country and beyond. The team agreed to make a statement, and we were blessed and thankful that so many people behind the scenes supported and assisted us. They believed that those who lost their lives simply because of the color of their skin deserved to have their stories told. When the sun rose on game day, we were ready.

Before I go on, I want to emphasize in clear and uncertain terms that, yes, I have experienced racism, prejudice, and discrimination. Black people like myself are not the ones that need to hear, listen to, and comprehend the hardships that we have endured for over 400 years and continue today. Meaningful change will come when people of other races and creeds become allies by educating themselves and stop sweeping issues of severity under the rug such as racism and show empathy. It’s that simple: Listen, empathize, support. Education is one of the most powerful tools we have in the fight against racism because it is foundational in the formation of an entire generation’s beliefs. Conversations with Alejandro Bedoya, the team captain, and Jim Curtin, our head coach, showed that we had their understanding and support. In a locker room with 12 countries represented, where complexions cover the full human range, we came together for the cause of justice.

We arrived at the fields and warmed up in a custom t-shirt with art and messages, including that the lives of black people mattered, designed by my friend and teammate, Warren, who created the solidarity t-shirt. All the teams wore them throughout the tournament. But underneath that shirt, we wore our statement.

For the first round of tournament matches, MLS put a patch on the back of all the jerseys and encouraged us to write a personal message on it. Everyone on my team wrote: ONE NAME TOO MANY. Those words reflected how we felt, but they were not our statement.

Kickoff was moments away now. I thought about the families of victims. I thought of their families and the voiceless others suffering. My teammates and I gathered near the sideline for a photo. We took off our warm-up shirts and, together, turned our backs to the cameras. My name is Raymon Gaddis. The name on my jersey that day read TAYLOR. Breonna Taylor. Each of my teammates wore the name of someone who lost their life or was affected by police brutality. To be quite honest, there are enough names that every team in the tournament could have done the same and still many stories would be left untold. Typically, making a statement on your jersey isn’t allowed in professional sports, which made it all the more important to use the platform to amplify that racism and injustice is still going on in 2020.

That Could Have Been Me

Which leads me to make the point: What is asked of black Americans and has always been unspoken but true is that I or anyone who looks like me doesn’t have the margin for error not to be perfect within a system not built for us to survive. When I wore Taylor on the back of my jersey I thought that could been me. I thought me being a black American, must I and others feel we have to be superhuman to see the blessing of tomorrow? I also know that no one in America—in particularly black Americans—should be forced to live under the unmerited pressure of being perfect. It’s not sustainable, especially if we want future generations to grow up to reach their full potential and to thrive in a country which claims to uphold the ideal that everyone is entitled to the equal pursuit of life, liberty and happiness. 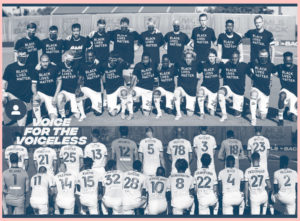 After the game, I said there was a sense of shock, “one, due to the entire team taking the field. Two, due to each player wearing a person’s last name who had died due to police brutality. And, third, the collectiveness of the team standing together to make a statement despite of what others thought, but what we knew was right to advocate for the voiceless.” We wanted the families to know that their sons and daughters had not been forgotten. That the families, still suffering, were not forgotten. And we wanted the world to know that there is a problem: Black people are being killed at a disproportionate rate by law enforcement. I want to add that not all law enforcement officials are bad people. But advancements in technology have exposed more incidents, captured and shared in real time, that give the world an uncut picture of what many blacks have endure throughout their lives.

The gratitude my teammates and I received from certain families of victims is something I will never forget. The salute from opposing teams in the bubble was solidifying. People outside of the soccer world told us that our message had traveled far. “When I said we were a voice for voiceless, I meant that literally, as the victims worn on our jerseys can no longer have a voice to express their concerns,” I explained. Every name we wore was one name too many.

I need to say how important it was to me to make this statement because so many have stood up and taken the charge before me, allowing me to be expressive in voicing my concerns today while being black in America. Being black, being alive while black, is not a movement. It is who I am every day, 365 days out of the year, seven days a week, twenty-four hours a day. It’s not a trend; it’s not here today and gone tomorrow.

Being black is who God made me to be. Being black is who I am: Not better than anyone else, but simply who I am. And I want you to know that being black does not make me any less of a person, or diminish my value as a person. As a black person in America, my life matters and should be valued equally. And although being black is who I am, through conversations with the Lord, I also understand that I am much more than that. (Meaning some people only see the color of person but not who an individual really is). I am a man of God and that’s what’s most important in my eyes.

We wanted their stories to remain in the public conversation, to lead to real change in America.

In the world of sports, the result is always important: We won the game. But the result that felt bigger and more real was the collective, unified demonstration by my teammates and I. Breonna Taylor, Eric Garner, Alton Sterling, Tamir Rice, Philando Castille, Sandra Bland, and other black men, women, boys, and girls who died at the hands of police—we wanted their stories to remain in the public conversation, to lead to real change in America.

In closing, I believe God gave me the courage and strength to fight the good fight of faith, which I hope gives others hope that a better tomorrow is on the horizon in my efforts to be a voice for the voiceless. 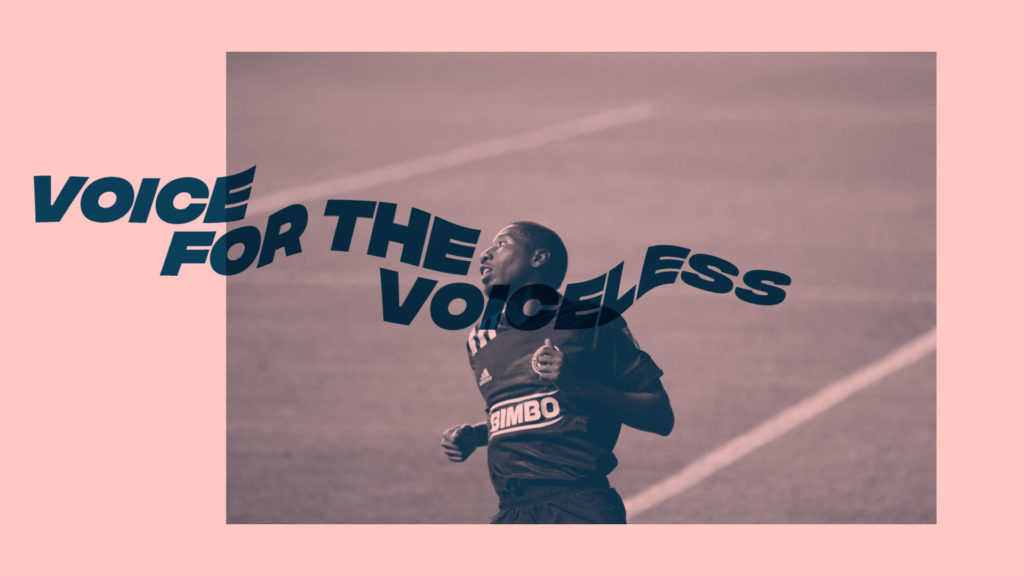 “The prejudice that is manifested in the world is a burden that threatens future change, blinding some to see that one’s skin color doesn’t define a person’s character and or the quality of the person God sees underneath” ‐Raymon Gaddis

I want to say the collective demonstration held by my teammates and me at the ESPN Wide World of Sports Complex is truly something that I will never forget. Especially since the beautiful game of soccer unites so many people through the love of the world’s game. My teammates within the Philadelphia Union organization showed me what I already knew: that there are great human beings from different walks of life, different backgrounds, and ethnicities that get the big picture. The big picture is that it’s going to take a collective of people who have the right heart posture and who don’t look like me to evoke change.

In the midst of everything going in this nation I am blessed that my freedom comes from the Lord and is not defined by circumstances that look to hinder my the freedom I have to live a life of happiness despite being black in America.

Raymon Gaddis is a defender for the Philadelphia Union. The Union selected Raymon in the 2012 MLS SuperDraft after his career at West Virginia University, where he twice made the MAC Hermann Trophy Watch List. He has since become the club’s all-time leader in minutes played.

Art by Aaron James at Howler, visit @mathdept or mathdept.com.