HomeWorld Cup1966: GOAL! documents the World Cup that brought England out of black and white

1966: GOAL! documents the World Cup that brought England out of black and white 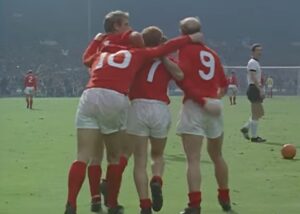 Memory is selective. World War II, for example, is a nightmare recalled in black and white. Indeed, life in England remained resolutely monochrome long after the war ended, as if color itself was an extravagance. When the Beatles lit the fuse on the swinging sixties with their film A Hard Day’s Night, they did so in shades of gray. And when the World Cup final between England and West Germany was beamed to forty million viewers on July 30, 1966, the live images flickering on television screens duly conformed, monochrome shirts of white and gray vying for a gray ball.

Yet while the mop-top version of the Beatles remains stubbornly black and white in our collective consciousness, we remember the 1966 World Cup in color — and not just any color, but a radiant, sunshine Technicolor. That’s because, with the exception of a few choice words uttered by BBC commentator Kenneth Wolstenholme and a single still image of England captain Bobby Moore on the shoulders of his teammates, cup held aloft, our memories of that tournament are provided courtesy of Goal!, FIFA’s official film of the 1966 World Cup.

For the English, it gets no better than this. Wembley Stadium as Eden, a prelapsarian time before corporate sponsorship stole the World Cup, branded the ball, and turned the players into billboards. It seems a more honest, more innocent era. But nostalgia corrupts memory. The speed of these games may appear languorous, but the brutality is breathtaking. In one of the film’s most notorious sequences, Pelé is taken out by a Portuguese defense intent on harm — once, twice — in staccato freeze-frame. Soccer’s Zapruder film. The greatest player in the world hobbles around on one leg, desperate to contribute to a lost cause. Four years later there would be substitutes, but not yet, not in this Eden. Here, the very idea of feigning injury seems beyond the imagination of the players, a tasteless act where so recently wounded men littered the fields of England. It is not yet the beautiful game.

Soccer was at an ideological crossroads in 1966, but it merely mirrored the age. Communists lurked around every corner, their agents in plain sight here: the Soviet Union, Hungary, Bulgaria, and of course North Korea. “The Enigma. Mysterious. So little known, they might be flying in from outer space,” says narrator Nigel Patrick, his voice simmering with Cold War intrigue. Of course, the working-class folk of Middlesborough immediately ignored all that, identifying with the underdog Koreans and cheering them on to the greatest upset in World Cup history. Patrick’s coda to the episode is delivered with Harry Lime understatement: “So Italy go home to their tomatoes.”

The writing, by the prolific Brian Glanville, set the bar for future World Cup films. But the unique sound design sets the film apart. Released at a time when televised soccer was in its infancy, before the unbroken buzzing of a crowd and bantering commentary established itself as the game’s ambient noise, the filmmakers — Ross Devenish, a South African director, and Abidin Dino, a Turkish painter — remained frugal with the film’s sound. The chanting, raucous atmosphere of a stadium becomes suddenly vestigial, leaving only the eerie thud of boot on ball or the galloping footsteps of players as they canter across the turf. This is the language of dreams, and its effect is intimacy. In these silent moments we are not one of the 97,000 in the stands, or the millions watching around the globe — no, we are on the field, in the game.

Hallucinations accumulate: Uruguay captain Horacio Troche slapping his West German counterpart Uwe Seeler across the face; a punctured ball apologetically deflating in the game between the USSR and Hungary; manager Alf Ramsey wrestling George Cohen’s England shirt back from Alberto González, refusing conciliation at the end of the famously ill-tempered contest against Argentina; Eusébio, the player of the tournament, weeping as Portugal is eliminated.

Goal! ends where it began. After all, everyone knows the 1966 World Cup was really about the war. The Union Jacks everywhere at Wembley, dusted off after VE Day and yet to be usurped by the more specific, remind all present that this is to be a staged reenactment. It is foreshadowed in the film’s opening credit sequence, itself a masterstroke of implication, existing as both prologue and epilogue: A frantic drumbeat accompanies English defenders in bloodred shirts, desperately forming a wall in the dying seconds of the final — a human barricade, protecting home soil from a German onslaught. An unseen ball fizzes past them; they turn, anxious, the camera remaining tight on their faces, those old faces that young men had back then. Seconds later they wince, their morale sucked away; West Germany has equalized. Glory, stolen at the death, replaced by the continued conflict of extra time. Geoff Hurst wipes the sweat from his eyes, hiding his despair. A new future awaits, as yet uncertain, but from this moment onward, always to be remembered in color.

Editor’s note: This essay appeared in Howler Issue 05 under the headline “A Technicolor Dream.”