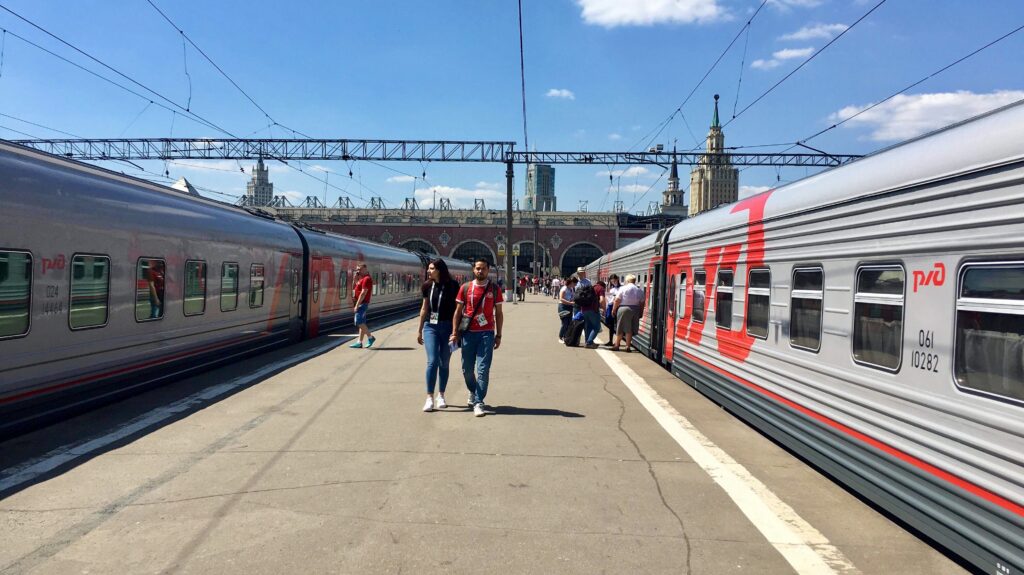 The World Cup stadium experience is like an ornate ice sculpture specially prepared for a glamorous event. Except it turns out the sculpture wasn’t carved by hand. It was poured into a plastic mould. And it’s not even a solid block, but a hollow-centered shell designed to reduce the time and expense of freezing. The genesis of the piece wasn’t born from artistic argument or rankled creative expression. Instead, a committee selected a crowd-sourced, market-tested, stock image of the universally palatable. Better yet, all of the guests will be long gone before the momentary beauty melts away.

The thing is effectively bespoke rental furniture, commissioned only because events such as these have fixings such as that. It neither offends nor inspires. The style shares an origin story with the naming of Warby Parker, Häagen-Dazs, and partisan think-tanks self-titled as “Institutes.” All are attempts to apply the cultural clout of a storied superior onto their own “prestige-for-all” facade.

And so it goes in Volgograd, where I travelled to watch England, braced to witness the source material for the opening stanza of “Football’s Never Coming Home.”

The event organizers have meticulously prepared each element of the matchday experience to ensure unobjectionable pleasantry and universal access to the game’s greatest moments. Albeit at the grave cost of creating a sterile fabrication of packaged soccer tourism.

Pre-match build-up is replete with crowd noise blared through the stadium sound system. Lyrics to each nation’s national anthem are displayed on jumbo-screens, karaoke sing-along style, gratingly out of sync with the orchestral accompaniment. Another round later in the match retains the mistimed promptings for the competing teams’ emblematic supporters’ songs. The result is forty thousand people mumble-humming.

Concessions outside are the products and sponsored profferings of megafirms, hermetically sealed, tightly wrapped, and handed over with the rictus of enforced courtesy. Each seating area has the same gleaming red “Coke” and “Bud” double embankment. Circling the stadium interior is like thumbing through a flip-book whose image doesn’t change. The scene could be situated on the banks of the Volga, or just as well within the first American settlement on the moon.

There is an undeniable sheen of newness. White paint glistens freshly applied and seats are visibly untouched prior to kick-off. However both stadiums reveal the organizers’ overarching aim: to enshroud the ordinary and economical in an opaque front of affected grandeur. The simple pitch and concrete stands are encircled in webs of steel netting and lighting structures built to inflate the perceived enormity of each stadium. They are structures tailored to the photo shoot, the blimp-cam, and the landscape panorama.

This sort of matchday experience isn’t a problem. It’s broadly well received, and a testament to the organizers’ preparations. Hats are rightly tipped.

But it is a shame. The experience devolves into a sad simulacrum of venerated World Cup highlights. Each ingredient is present, but in synthetic form.

In a parallel universe I left crestfallen, still in search of the organic experience unique to this Russian edition of the World Cup. Thankfully, I had already found it on the way to the match.

My partner and I had departed Moscow the previous morning on the sleeper train. Our room was walled on each side with bench seating that folded into two sets of rudimentary bunk beds. Sharing the space were assigned roommates Nikita—a Russian fortysomething sporting several chrome serpent rings—and his teenage son Anton. Details passed back and forth across the room through finger pointing and gross mispronunciations of a Lonely Planet phrasebook. Anton accepted an offered biscuit and mumbled back “Syank-yew” along with a volley of crumbs.

The train’s café sold beer en masse to the growing contingent of fans pooling around the bar. Uniformed women cooked meals to order. Uniformed fans barked requests for another pint. Open cooktop flames coupled with the stifling heat of cramped human mass to send forth a frontier of pan-fried, ale air announcing the café several carriages away. By mid-evening a red tide of fez-headed, flag-laden Tunisians leapt and chanted and sang in frantic unison.

The passing steppe was unalterably, unbelievably level. Momentary blips of hillock would interrupt the ceaseless sweep at quick intervals. Otherwise, fields were shaped only by the varying length of grass stretching from train window to faraway horizon.

A shrieking rooster signaled sunrise the next morning. We halted alongside the first recognizable neighborhood of the journey. Behind two-bedroom family homes huddled into a beleaguered cul-de-sac spluttered a crop duster mid-flight. It seemed to crawl, almost stationary on the distant cerulean expanse, no more than fifteen meters above the columned field beneath.

In the foreground sat the plywood perimeter of a hockey rink. Browned grass and knee-height weeds shot up from the soil, just a few months since and until the icy takeover. To see rural Russia sat so quaintly and simply was another delight along our rolling passage south.

Better still were the varied characters within the carriage. Each a disparate member of a cast united in a long and close affection with the beautiful game.

Ian had flown from Sydney, by way of sojourns in Mongolia and Uzbekistan, only to arrive in Moscow hours before the train departed. He was at the ground for England’s quarterfinal in ’66. A grimace recalled how poorly Pelé was treated at the tournament.

Two longtime schoolmates from Sheffield, both now beginning to salt and pepper around the ears, sipped lager in the carriage corridor. We commiserated over Moscow’s lack of sunscreen, and showed off burns like they were prison tattoos. The back of his neck was pink as strawberry sherbet. I cackled and rolled up my own sleeve to reveal a more speckled hue of soft rosé.

A small boy belted an even smaller soccer-ball my way as I walked back to my room. It was an almighty, enthusiastic hoof with admirable form. I think he chided me in Russian when my return went astray. We continued back and forth for about fifteen minutes. His father leaned out of their room, hands clasped together overhead, and shook with delight at the sight of his son’s attention momentarily directed elsewhere. He later said “thank you” with a gift of Russian chocolate.

That playful innocence of games emanated from the World Cup-brand “Volgograd” shirt worn by several passengers. A cartoon fish sprung high above a waving blue stripe of Volga. Another cartoon of the then-unfamiliar “The Motherland Calls” statue on the Mamayev Kurgan dominated the scene. It was a caricatured reimagining of Volgograd’s defining features; only a prior reading of Antony Beevor’s “Stalingrad” prompted any reminder that we drifted toward the site of catastrophic human suffering.

Our route transversed the scene of tank battles and air-bases and field hospitals devoid of supplies. Of civilian slaughter and propaganda pamphlets fluttering down from a flak-filled winter sky. We rolled closer to the epicenter of sniper shots ringing off burnt-out rubble, prisoner-of-war camps, and the still-buried remains of frostbitten soldiers, some of whom resorted to cannibalism in a final attempt to stave off a fatal hunger. That history was now largely grown-over and rebuilt and renamed, but is still visibly memorialized and remembered in Volgograd proper.

The train was without internet. Four hundred passengers scrambled in a collective nervous tic to tune into the ongoing matches. Some huddled around phones with a data-enabled Russian SIM. Others resigned themselves quickly and returned to reading or an early bedtime.

My partner and I found a radio stream and sat together in shared silence, facing each other on the top bunk. Two sets of headphones and an audio-splitter port provided crisp commentary without disturbing our sleeping bunkmates. Our hands and heads gesticulated wildly in mute euphoria as Mexico put one past holders Germany.

During the periods when poor connection halted the stream we simply smiled and looked deeply into one another.

I have spent thousands of hours glued to the game on screen or in person. My attention—and our attention when we watch together—had always been solely attuned to the television or playing field. Conditions otherwise unfavorable led us to this uniquely shared experience. It was a profoundly unexpected intimacy in a setting I thought would be no more than the means of transit between momentous match-days. Instead, it capped a genuine, glittering journey and the most sublime twenty-four hours of the trip.

J.M. Keath is an aspiring travel writer and book reviewer. He has only recently taken the step of doing more writing than aspiring. Upcoming work and reviews can be found at jmkeath.com.