Zhunmurino, Buryatia Republic – The Buddhist monk Anatoly Ayuvith can predict the future, to heal and even to tell if rain will come. But in one of the distant corners of the vast territory of Russia, he has no idea that the World Cup is happening.

“I didn’t know about it,” he admits. “I know Brazil is always the best team. But I think our national team has been better lately,” he says, in a mix of hesitation and embarrassment in light of the issue that was putting into question his obvious powers. Only a few hours before the kickoff time between Russia and Uruguay, the region on the border with Mongolia seemed to live a very different reality from the one the Kremlin wants to show to the world.

Only five kilometers away, milk producer Lyubila Tserenyona talks about the World Cup with a different tone. But it was also clear that soccer culture is not a strong characteristic of the region. “Today we play against Argentina, or something like that. I used to love to see Brazil playing in the ’90s. They had Pele, Maradona”, she says, confident of her soccer knowledge.

There, 5.1 thousand kilometers from Moscow, the World Cup is a mere mirage. But it is not only the soccer fever that is a distant reality. Economically, the disparity between the capital city and the satellite regions of the former Soviet Union are still profound. And in terms of ethnicity and culture, the Buryatia Republic marks a strong contrast with the rest of the country. Out of its one million inhabitants, 25% are Buddhists.

In the next-door province, Irkutsk, discussion about the Russian team is more frequent. But still, the tournament is seen as a distant dream. On the roads crossing the immense Russian territory, not a single sign of FIFA. At the local airport, no reference that would make visitors believe they’re in a country hosting the World Cup. The sole images of sports heroes where from the most popular sport in town: hockey.

The omnipresent images around the world of Messi, Cristiano Ronaldo or Neymar are nowhere to be seen.

Even there, the vast majority of the local population doesn’t even have the shirt of its national team to parade with pride, while the images of the games can only be seen thanks to satellite dishes on the roof tops of Soviet-style buildings.

The game against Uruguay, last Monday, was a rare moment for the local population to establish simultaneous contact with the rest of the massive country. “It is a day like this one that I understand better what is to feel Russian,” said Anton, a student in one of the few Irkutsk bars showing the game.

But not everyone thought like this. “I don’t feel that the World Cup is in my country. It is as if it were abroad,” said Irini Wausan, who was watching her first soccer match. Early in the second half, she asked, “Which color of shirt is Russia wearing?”

When the final whistle blew, and Russia lost 3-0, the result seemed not to be an issue for those watching the match. The indifference is a symptom of a distance that’s more than physical. Baikalsk, a town of 14,000 in the province of Irkutsk, is one of the 142 cities in Russia that are about to disappear.

Strengthened during the Soviet Era, these places only survived as supplies of cheap labor to heavy industries. Like Baikalsk, other cities found themselves in situations in which the entire population depended on one employer, in a centralized system controlled from Moscow. But the system went bankrupt and, for decades, these populations went forgotten. Far from the modern, self-confident and sophisticated image Vladimir Putin wants to show the world, these satellite Siberian cities register 25% of their population below poverty lines.

According to Caritas, drug addiction rose five times in 20 years and 30% of deaths are attributed to alcohol. Life expectancy fell from 64 in the ’90s to only 55 in 2017.

“The process of change after the collapse of socialism has pushed many to the exclusion,” Caritas warns in a report on the Siberian situation. “From an egalitarian society that Russia was aiming for, the country is farther than ever from that reality,” says the institution. “One fifth of the Russian population now has half of the country’s income, while the poorest 20 percent own only 6 percent of GDP,” it estimates.

“The disparity between the winners of modernization and the losers is not necessarily visible in Russia,” Caritas goes on. “Many of the old, sick and disabled are living behind walls of privacy or in remote regions, as are the cases of satellite cities in Siberia.”

In 2013, the Russian government determined that it would need US$33 billion to modernize the more than 100 cities on the brink of collapse. Instead, they spent $50 billion on Sochi for the 2014 Winter Olympics and another $11 billion for the World Cup.

Without money, the result was the collapse of dozens of these cities. Baikalsk was one of them, devastated by the bankruptcy of the BPPM paper mill company that employed practically all of its families.

The plant opened in 1966 on the edge of Lake Baikal, which contains one-fifth of the world’s unfrozen fresh water. At its peak, it employed more than 2,000 people and produced 100,000 tons of pulp per year. Work began in the 1950s and was part of the Soviet military complex.

Dmitry Medvedev, the current prime minister, even pledged a billion dollars to bail out the region and the factory received proposals from Chinese investors. None of these promises were ever transformed into reality. Today: empty streets and houses below a monstrous, dormant factory.

“The end of the factory has changed our lives,” says Ludmilla, a vegetable seller at a local market in Baikalsk. She says that her husband, who depended on pulp production, began to drink and to beat her. She got a divorce and he soon died from the consequences of alcoholism. She did not know that Russia would play Uruguay that night. 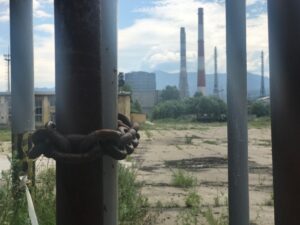 Vasilla Sibirtsev, 78, a former pulp-mill employee, insisted that everyone support the national team. “We will win until the end,” he said. But he did not know his players.

Not far away, illegal Uzbekistan immigrants working on the recovery of a boat admitted they were just waiting to finish the day to start following the World Cup games. Because of the time zone, practically all matches take place at night and dawn in Siberia. “We support Brazil and Russia,” said one of them, asking that his name not be revealed.

Moscow angered many residents of the region when it tried to persuade them to leave their homes and their cities. In exchange for US$25,000, these citizens were invited to migrate to cities that would survive. But for poorer families, moving to a new city was unrealistic. They would have to sell their homes for a maximum of US$2,000 and look for alternatives in big cities, most valued at around US$60,000.

In silence, the factory that has polluted the waters of one of the largest lakes in the world for more than half a century looms over a village that has nothing to do with the images of the World Cup and its host cities’ fireworks.

“What changes in my life if Russia wins?” asks Svetlana Nikolaivna, a fish-seller from Baikalsk. Asked if she would stay up late for the the game, she made it clear that this was not going to happen. “Tomorrow I need to be at work early. It’s my work that assures the lives of my kids,” she says. “Here, we don’t have time for football.”

Jamil Chade is the correspondent for the Brazilian daily O Estado de S. Paulo in Geneva. He has been twice elected as the best Brazilian foreign correspondent and chosen as one of the 40 most influential journalists in Brazil. Chade has covered four World Cups, as well as two Olympic Games and travelled to over 60 countries. His investigative work and his five books have led the Brazilian National Congress to establish inquiry commissions to deal with corruption in soccer and opened the way for the arrests of sports officials in Spain.