The Spirit of Sochi, by Manuel Veth

During the World Cup, Howler will feature a different writer each day reflecting on the action, their experience of the day’s games, or just offering a consideration of what they’ve seen and felt so far. Today, Manuel Veth sends word from the Germany-Sweden match, in the “Miami of the Soviet Union.”

Absolution. Would it be possible for the world champion? This fallen giant who was threatened to follow in the footsteps of fellow giants Italy and Spain, who dropped at the very first stage of their World Cup title defenses.

Would Germany join Italy and Spain and for the first time fail to make it out of the group stage? Or would there be absolution after a training camp to forget, a first ten days in the woods in Moscow and a performance against Mexico that was not worthy for a world champion.

Storm clouds were gathering not just over the World Cup prospects but also over the Fisht Olympic Stadium in Sochi on the Black Sea coast. Sochi and the micro-district of Adler where the stadium is located was the base for last year’s success at the 2017 FIFA Confederations Cup. 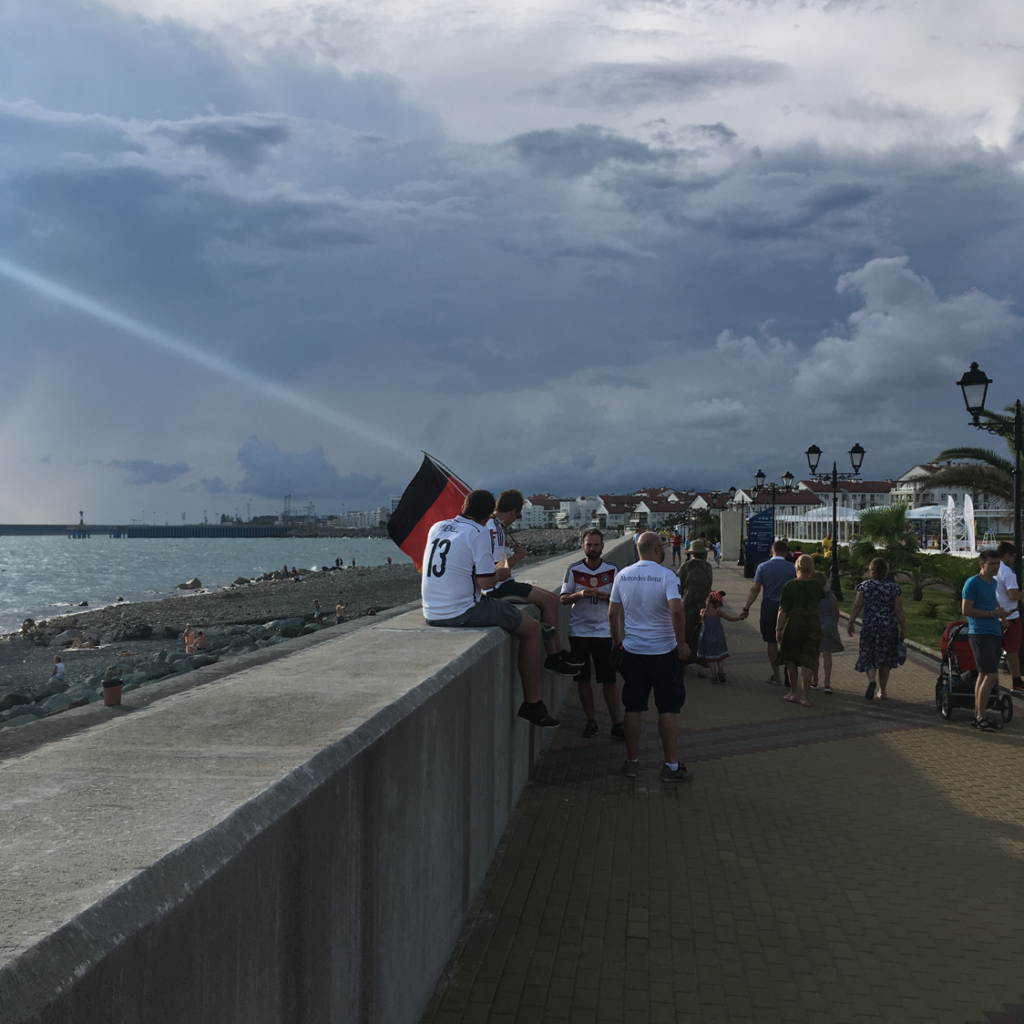 Built for over $50 billion by Putin’s cronies to host the Olympics in 2012, Sochi and Adler  is a marriage of Soviet kitsch and post-Soviet bling-bling so often associated with the glitz and glamour of the novyi russkii (new Russians), better known as “the oligarchs” in the West.

The Black Sea coast has been place for the rich and famous since the days of the Tsarist Empire. Here on the foot of the Caucasus Mountains, the climate is subtropical and in stark contrast to the rest of Russia—it has always produced an image of heat and humidity, with old Tsarist palaces and Soviet brutalist buildings slowly being taken over by decay.

Sochi is the place then where Germany shall be resurrected from the ashes. Return to the circle of World Cup favorites. For Bundestrainer Joachim Löw the spirit of Sochi was all-encompassing last summer, and it’s supposed to do its magic again.

Sochi is its own beast, however. It is the Miami of the Soviet Union, always on the brink of thundershowers with air becoming so thick due to the humidity that one can almost cut it.

Cut it like the tension. As the game is about to kick off storm clouds roll in from the Black Sea. A sign for die Mannschaft? It appears so after Toni Kroos, pass machine Toni Kroos, who never plays a false pass, misplays the ball to give Sweden the lead.

The lead seems to signal the end. Sochi, the place of hope, has become a place of despair—at least, so it appears at halftime. Kroos, however, is a good fit to the occasion and as the skies open up to unleash the full wrath of the Black Sea, Kroos turns the tide to get Germany back in the game by assisting a Marco Reus goal to make it 1-1.

Kroos, however, is not done there. The minutes tick, the air becomes thicker, and the despair among the Germany fans becomes palpable. Then the 95th minute arrives, Germany are awarded a free kick. Kroos taps the ball to Reus—then Kroos hammers it into Sweden’s goal.

Is that absolution? Is the spirit of Sochi back? Will Germans one day speak about the spirit of Sochi when speaking about the class of 2018? Time will tell, but it would be fitting for this World Cup if a winner produced in the 95th minute, at a place that combines the old and new Russia better than anywhere else, would ultimately produce a champion.

Manuel Veth is the Editor-in-Chief of the Futbolgrad Network, which focuses on football in the post-Soviet space, the Bundesliga and football in the Americas. He has also been published in the Guardian, Newsweek and several other outlets.