Anthony Precourt’s letter to the people of Columbus 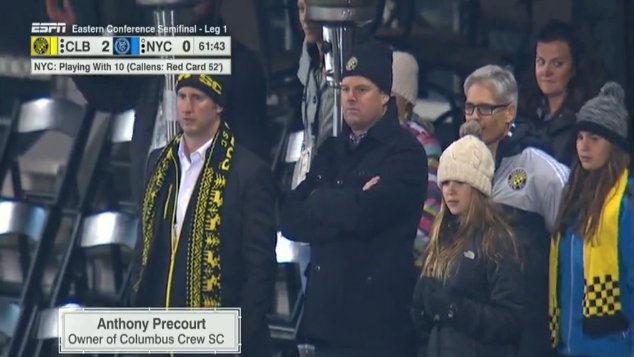 First, I’d like to thank you for your incredible support during our MLS playoff success against NYCFC. Over 15,000 of you faced harsh temperatures to cheer on Gregg Berhalter and the boys in yellow and black during the first leg. You’re truly our 12th player. I’m continuously surprised any of you could find Mapfre Stadium. As I’ve made evident over the last few weeks, I’m not happy with our current stadium situation. We need a stadium in downtown Columbus in order to grow. The nearly four-mile stretch between downtown and our home is one of most dangerous in the greater Columbus area. I mean, I don’t even pass one Chipotle on my way to games, which is lame. Yet many of you made the treacherous 13-hour trek to Mapfre safely, in spite the wolves and roaming gangs of cannibal mutants. You are brave souls on par with the pioneers of yesteryear. Color me impressed.

The internet has taken my desire to move the Crew from Columbus to Austin, Texas, as a dismantling of your favorite team. This could not be further from the truth. The team is merely relocating. I hope this analogy will help you understand:

Please picture your grandma. She is getting older and living alone has become dangerous. You want to put her in an assisted living facility so she can receive the necessary care. You want the city to build her a brand-new home closer to you, but the city refuses. Those pencil-necked nerds say she already lives in an assisted living facility a short drive from your home. This obviously angers you. So you ship your grandma to another time zone, where everyone questions if they even want your grandma there.

In this scenario, is your grandma no longer your grandma when you move her into this other assisted living facility? No! She is still the same ole Mima who smells like canned soup and won’t shut up about meeting Elvis that one time. The only difference is she is now hundreds of miles away. Nowhere near her loved ones.

This whole “situation” with the Crew is more or less the same thing. Same Crew. Different City.

Our whizzes in the marketing department and I have been brainstorming ways to ensure a smooth transition to Austin, Texas. Starting next season, we’ll introduce more authentic Austin elements to Mapfre Stadium. Many of you have heard of Austin City Limits, the longest-running music series in American television history.  Well, in 2018 we’ll debut Just Barely Columbus City Limits! The longest-running music series performed in a pre-21st century soccer-specific stadium! Wowzer. Doesn’t that sound fun? Immerse yourself in Austin culture as you get your socks rocked by famed local performers Spoon and Willie Nelson. Embracing the music scene is one step closer to adopting the relocation.

Also, all concession stands will now start selling barbecue, a truly Austin classic. We want to keep the experience as close as possible to what you’ll find in our “potential” new home. So get ready to line up bright and early for this delicious meal because our pitmasters are only cooking up a limited amount. Food will sell out before 11:00 a.m. Isn’t that fun? Eating piles of meat before noon! Why can’t they just make more? Who knows! Texas, baby! Gotta love it! WOOOOO. This is only the beginning. All this non-stop, down-south fun will have you saying “y’all” by 2019.

Listen. Before you get snarky on Twitter, many of you are ignoring one simple fact. Austin isn’t that far from Columbus. The year is 2017. Nowhere in the world is too far (Downtown Columbus to Mapfre Stadium being the exception that proves the rule). A quick five-hour flight with a layover in Houston and boom, you’re in Austin. Take a sleep aid and you’ll wake up in our not-quite-soccer-specific shared stadium with the legendary University of Texas football team. Go Longhorns! I mean, it’s all football, right? No need to split hairs. Just remember to leave the game early for your return flight because if you miss it, you’ll have to pay the penalty to switch flights, which can get pricey. Also, if you brought a carry on, you’ll have to pay the fee again. Act fast because this second flight does sell out. Whatever. This is all besides the point. If you love the Crew, as so many of you won’t stop shouting at me, then you’ll make the trip for every home match.

As you can see, this wasn’t a spontaneous decision. We thought this “potential” move through, so all the residents of our current market will not feel abandoned. This historic franchise will live on—regardless of location or name or whether Austin even wants a professional soccer team in the first place. So let’s put this hostility away and support the players on this team that we all love and I own. After all, I’m just a rich man standing in front of angry fans, asking them to give me their money before I move a beloved part of their community far, far away.

Does that really make me a bad person? Shh. No need to answer. Of course it doesn’t. Save your breath for cheering on the team while you can.

Yours truly (for now),