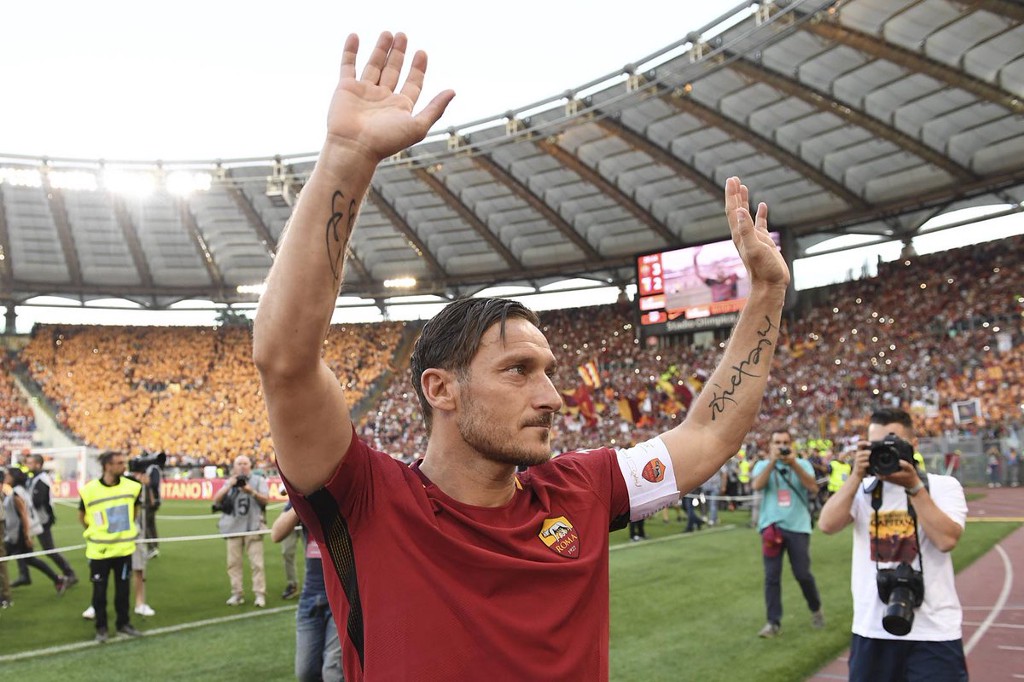 Roma ended their season by beating Genoa 3–2 on a Diego Perotti goal in the 90th minute that secured second place in Serie A and a Champions League place next season. But the joy of this success was completely overshadowed by the sadness of Francesco Totti’s farewell after 25 years with his hometown club.

Totti came on in the 54th minute and would’ve scored if Daniele De Rossi didn’t edge him out to the ball in the 74th minute. After the match, there was a special ceremony where Totti symbolically passed his captain’s armband to Mattia Almaviva, the youngest captain in Roma’s youth academy. Mattia was born in 2006, when Totti was already 14 years into his professional career.

Il Capitano passes on the baton to the next generation. #TottiDay #ThanksTotti #Totti #ASRoma https://t.co/8BJf66ogbe

Totti was presented with a framed shirt inscribed with a heartfelt message.

And his teammates tossed him in the air one last time.

All the while, everyone in the stadium was crying as if they were living out the ending of Old Yeller.

Totti retires with 706 appearances and 307 goals for Roma across all competitions. He won Serie A in 2001 (and was a runner-up eight times, including this season), the Coppa Italia twice, and the World Cup in 2006 with Italy. He led all of Europe in scoring in 2006/07, and led Serie A in assists three times.

Before his final match, Totti wrote a letter to Roma fans, which was published on the club’s website.

Thank you to my mother and father, my brother, my relatives and my friends.

Thank you to my wife and to my three children.

I wanted to start from the end — from the goodbyes — because I don’t know if I’ll be able to read these lines.

It is impossible to sum up 28 years in a few sentences.

I’d like to do so with a song or poem, but I can’t write any.

Over the years, I’ve tried to express myself through my feet, which have made everything simpler for me ever since I was a child.

Speaking of childhood, can you guess what my favourite toy was? A football, of course! And it still is today.

At some point in life, you grow up — that’s what I’ve been told and that’s what time has decided.

We couldn’t wait to hear the referee blow the final whistle.

I still get goose bumps now when I think back to it.

Today, time has come to tap me on the shoulder and say:

‘We have to grow up. As of tomorrow, you’ll be an adult. Take off those shorts and boots because starting today, you are a man. You can no longer enjoy the smell of the grass, the sun on your face as you bear down on the opposition’s goal, the adrenaline consuming you, the joy of celebrating.’

Over the past few months, I’ve asked myself why I’m being awoken from this dream.

Imagine you’re a child having a good dream… and your mother wakes you up to go to school.

You want to keep dreaming… you try to slip back into the dream but you never can.

This time, it’s not a dream, but reality.

And I can no longer slip back in.

I want to dedicate this letter to all of you — to all the children that have supported me.

I’d like to think that for you, my career has become a fairytale for you to pass on.

I’m taking off that jersey for the final time.

I’ll fold it away, even though I’m not ready to say ‘enough’ and perhaps I never will be.

Forgive me for not giving interviews and clarifying my thoughts, but it’s not easy to turn out the light.

I’m afraid. It’s not the same fear you feel when you’re standing in front of the goal, about to take a penalty.

This time, I can’t see what the future looks like through the holes of the net.

Allow me to be afraid.

This time, it’s me who needs you and the love that you’ve always shown me.

With your support, I will succeed in turning the page and throwing myself into a new adventure.

Now, it’s time for me to thank all of the team-mates, coaches, directors, presidents and everyone who has worked alongside me during this time.

To the fans and the Curva Sud, a guiding light for all Romans and Romanisti.

Being born Roman and Romanisti is a privilege.

Being the captain of this team is an honour.

Now, I will go down the stairs and enter the dressing room that welcomed me as a child and that I now leave as a man.

I’m proud and happy to have given you 28 years of love.