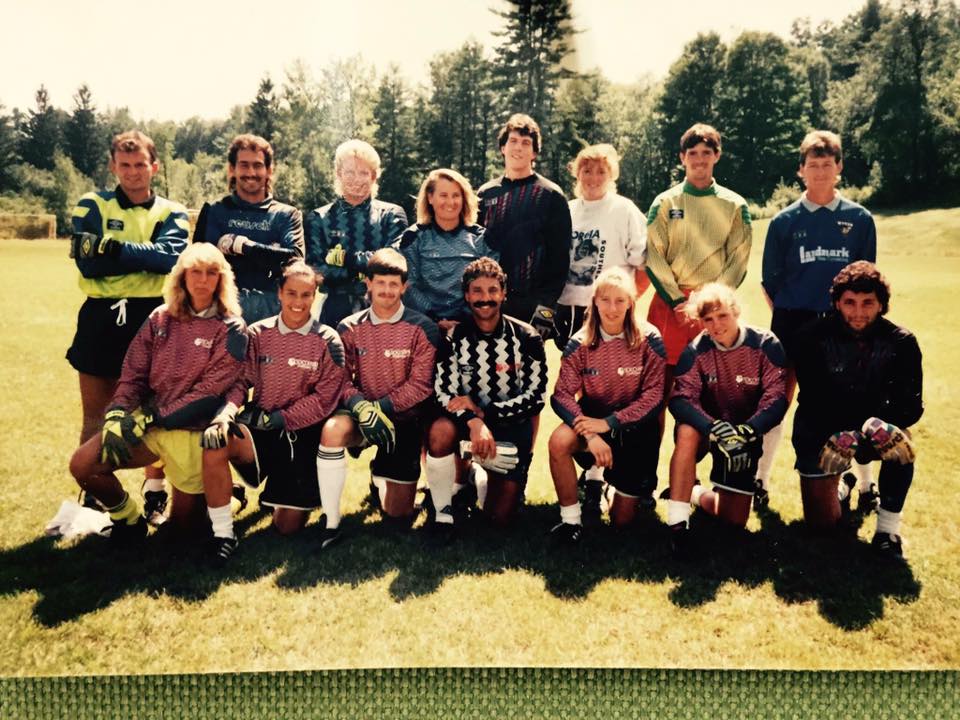 I know your first instinct, when presented with the picture above, is to giggle at the garish goalkeeper jerseys and outdated hairstyles. But take a closer look: front and center, in the stripey top, is Tony DiCicco. This is a staff photo of a Soccer Plus Goalkeeper Camp that was held in Connecticut circa 1990. That would make Tony 42. He passed away on June 19 at the age of 68.

Tony is an American soccer legend: player, coach, entrepreneur, World Champion, broadcaster. There’s little I can add to his story, except for one thing—I know how good he was. This is no small thing; just how good were the players who predated HD video? There’s a natural skepticism regarding the skills of those we never got to see with our own eyes, a tendency to diminish their accomplishments since they are received by word-of-mouth.

I remember stepping into goal for a demonstration that week in 1990. Tony stood just outside the box with a dozen balls at his feet, all the campers watching from behind the goal. Wait till they see how good I am, I thought. Moments later, Tony started to shoot, and I found myself under assault from a fusillade of viciously swerving volleys and half-volleys. I could hear the kids behind me gasping at the absurd power of Tony’s shots. I managed to keep a few out; others flashed into the net. Throughout the exercise, he kept up a running critique of my technique for the benefit of the campers, and never so much as lost his breath.

The tactile sensation of those shots smarting my palms is still so vivid in my memory that I have a hard time reconciling the thought of anything, even cancer, robbing Tony of that strength.

Look at the picture again. What else do you notice?

Six female coaches at a co-ed goalkeeper camp might seem normal today, but that’s only because Tony was doing it a quarter-century ago. It was a recommendation from Kim Wyant, in the blue jersey directly behind Tony (and now head coach of the men’s soccer team at New York University), that helped me get that job at Soccer Plus, and I have to admit that I assumed the female coaches worked with female campers. Not so. Tony never made a big deal out of it. He didn’t explain to teenage boys of the previous century that their female coaches were more than capable of instructing men. He just let the women demonstrate it.

We saw Tony in so many roles during those camps: coach, motivator, entrepreneur, leader. I ran afoul of him just once, when I called him to complain that the business office had not yet mailed me an airline ticket to travel from one camp to another. Exactly why, he wanted to know, was I bothering him with this trifling detail, instead of his business office?

I didn’t want to admit the real reason, which is that I just wanted to talk to him. I worked only about a half-dozen camps for Soccer Plus over two summers, and my few one-on-one conversations with Tony were necessarily short.  I was envious of the coaches who knew him better and had earned his trust. Perhaps the minor ticket snafu would lead to a more personal conversation. I tried to take a shortcut. Lesson learned.

After I finally transitioned from playing to coaching full time, I ran into Tony occasionally, at licensing courses and youth tournaments, where he would be putting on a clinic or giving a presentation. He once published a letter that I had sent him in his Soccer Plus newsletter, and he approved my waiver into an advanced NSCAA coaching course. I saw him most recently at another coaching course, in Ft. Lauderdale, in January 2016. I passed on some good wishes from a mutual friend, and, a few minutes later, I realized we were having the casual, personal conversation I had yearned for all those years ago. I finally got it because I no longer needed it, if that makes sense.

In the picture, that’s me standing at the back, all the way to the right, 24 years old. That’s Greg Kenney next to me, now one of Kim Wyant’s assistant coaches at NYU, and John Pascarella kneeling in front of me (a few years later, we would play against each other in a USISL game without realizing it), and my buddy Billy Steffen, bookending me at the far left. But look at Tony. That smile is not a put-on for the camera. He’s doing what he loves. He got to do it every day of his life.

Until the cancer. I lost my dad to it. It was a debilitating step along the way in my mother’s eventual passing from kidney disease. And it even took Blake, my first dog. But I’m not going to let cancer infect my memories of Tony. I’ll remember the 1999 World Cup triumph, and his gold medal at the Atlanta Olympics, and his TV work—all injected with Tony’s knowledge, passion, and humor.

And I will remember those volleys. I don’t often pine for my youth, but I’d like to be in that goal again, Tony firing balls at me, smiling and teaching and encouraging all of us to be better, the kids behind my goal in awe of his power and energy. At the time, those sweetly stinging shots seemed like they might go on forever.

Justin Bryant is the author of Small Time: A Life in the Football Wilderness and Season of Ash. He is an assistant coach with the UNC Wilmington women’s soccer team.