HomeStoriesThe Shape of a Dream Can Expand and Shrink: An American Soccer Life in South Korea, Part II

The Shape of a Dream Can Expand and Shrink: An American Soccer Life in South Korea, Part II

My roommate Ha-eun spends some of her free time watching videos on her phone. She lets me watch over her shoulder and I see an older woman, sometimes an older man, talking quietly in front of a window box of flowers against a mint green background. The woman uses her hands a lot when she speaks, pauses more than most Koreans I have listened to, and sometimes the video cuts to an image of the outdoors, of lush greenery and waterfalls. Ha-eun tells me she is watching sermons from the online Christian church she belongs to.

I ask her, in a conversation of broken English, what she wants to do after soccer. She says she wants to play until she is a grandmother of the team, until she is 35. She only loves one other thing as much as soccer, and that thing is God.

Ella wanted to go to the University of North Carolina when she was six years old and watching Mia Hamm, a Tar Heel, play in the 1999 World Cup. When she graduated from high school, she walked on at UNC without a scholarship and was captain of the team by her senior year. When she graduated, she was drafted into the American professional league.

I meet Ella playing in Korea. She is 24. I ask her what she wants now and she responds without hesitating. She wants to be a starting player on an American club team. She wants to play on the national team. Her goals are ambitious, and concrete, committed.

I hesitate in customs or hospital forms, anywhere I am asked to fill in a box with my occupation. I wonder if it is fear, a change of heart, self-consciousness or something else that makes it harder to write down now than it was in the third grade.

I go with my teammate Yun-seo to a Korean public bathhouse (jjimjilbang) for the first time. She tells me to bring my own shampoo and soap. Our teammates have already arrived for their post-training soak and they are scattered in pools filled with water of various temperatures. Most of them walk back and forth from the hot to the cold.

A daughter holds the arm of her mother as she traverses the tiled floor of the bath room. Her mother, I learn, has recently turned 100 in Korean years. Her skin is brown in big patches and thin like paper. She is all bones and bent forward slightly. She is helped up the steps by her daughter but still has the strength to dip herself into the hot bath.

Yun-seo and an older woman walk together toward the hot bath where they fill up a tub to wash their delicates. Yun-seo is 30 years old. She is rail thin, strong, lean, nothing extra on her. In one swift movement they bend to fill plastic buckets full of water. They return to their stools, soap and scrub their delicates and then leave them to soak as they begin their own shower. Their rituals in the sauna are identical. They both handle the water with the same confidence, control it.

I am too big for the jjimjilbang. If I don’t sit on a stool, I have to arch in wild angles to fit under a shower head. If I do sit, my knees, gangly, dangerous things, begin to enter into my neighbors washing territory. I am pink, a unique hue, after soaking in the hot bath.

When I leave to dry off I discover that the towels in Korea are small, big enough to dry my body but not to cover me up or swaddle me. I see my uncovered body move in the mirrors where my teammates dry their hair and moisturize meticulously. I’m larger than I should be. I come from a family of chicken legs and dancers.  Instead, my legs are made for sprinting, kicking. They have been shaped for this purpose and they are out of proportion.

I keep a mental list of things that I will do when I finish playing soccer. Start long distance running, prioritize writing, tend to a garden, take cello lessons, cut my hair so short it doesn’t fit in a ponytail. I wonder what my body will look like then. Everything that has given meaning to my accomplishments is housed in it.

Soccer recedes slightly, I step towards it, it steps away and I step forward. Again and again and again it leads me, incidentally, toward something that looks a lot and sounds a lot like a career. My long-distanced boyfriend, who was also a college athlete, likes to remind me of an NCAA commercial: photos of students in lab coats, at long meeting tables, on farms. 98 percent of college athletes will go pro in something other than sports, it says.

In Korea, I know that my roommate doesn’t drink coffee, she uses cosmetic face masks and enjoys eating candy in her bed at night. I know she has a girlfriend who is 26, I know she likes to sleep in and she dyes her own hair in our sink from black to blond and then to black again. In the heat of the summer, we lay naked across the room from each other, sprawled on our beds. But we don’t often speak. 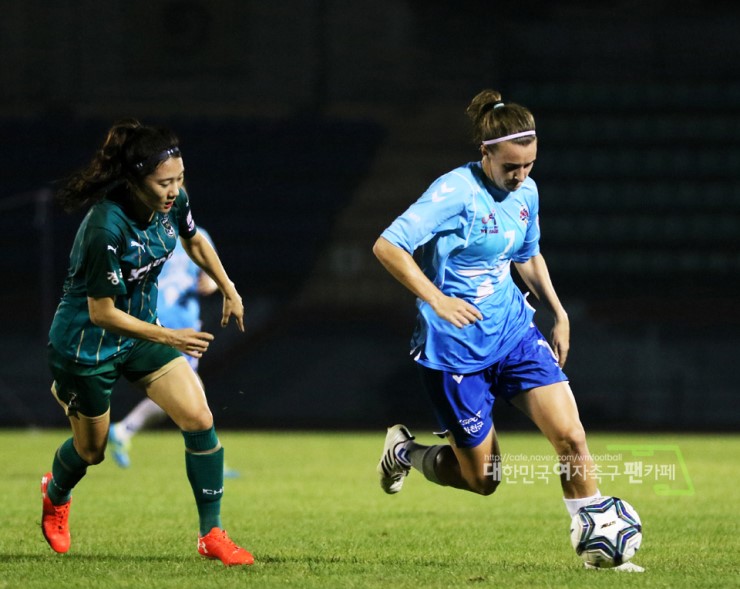 On the field, my typically vocal leadership is reduced to movements, gestures and often to shouts in a language that I know my teammates cannot understand. When I miss a shot I can only shrug, and they can only sigh.

“In tennis you are on an island,” Andre Agassi wrote in his memoir Open, “of all games men and women play, tennis is the closest to solitary confinement…. Tennis is the loneliest sport.” I’ve heard other famous biographers argue the same about boxing, or swimming.

Agassi felt lonely in his sport because he was alone. He was face to face with his opponent, in a corner, with no one on his side except maybe a coach watching from the stands. But being alone is not the same as being lonely. No, tennis is not the loneliest sport.

I am suffering from fatigue and the team doctor recommends that maybe it is caused by stress. He takes a blood test, and then sends me to see a sports therapist.

What do you see when you think of soccer? The therapist asks when we first meet.

Hidden in a messy box of DVDs in my parents house, a video of myself playing soccer: 2005, high school state championship. I am much smaller, quieter, a stranger. I hug the sidelines and don’t gesture much with my hands like I do now when I play. I try to piece together a story of the day from these clips but my imagination fails me. I find now that I have no real memory of myself as a soccer player; I am not sure of what I thought or how I felt.

I don’t do most things now that I did in the 9th grade. I don’t do homework, I don’t sit in hallways, I don’t drive aimlessly in my parents’ car, don’t pack myself lunches. But I do play soccer. 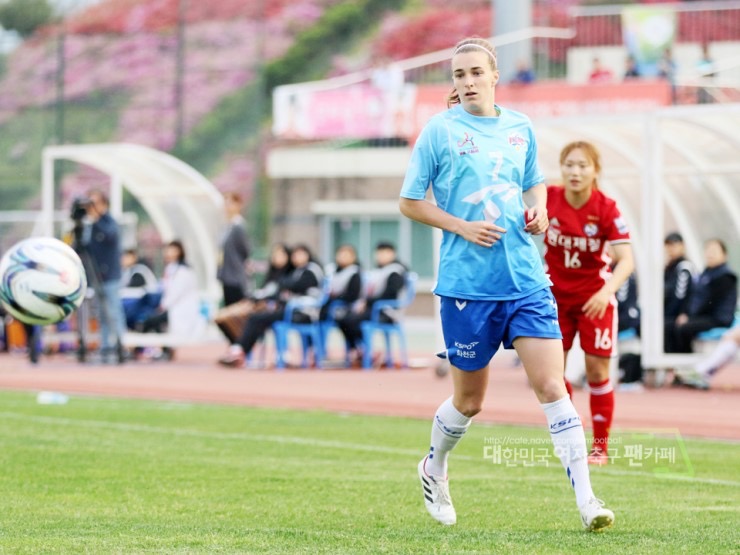 I wonder if the ways soccer has changed outnumber the ways it has stayed consistent through these years. I wonder how it has stretched, transformed, how the shape of its dream has been revised. I wonder if, like clothes, habits and friends, it is possible to outgrow soccer —or for it to outgrow me.

The doctor sends me a message in a week. My iron levels are very low— that explains the fatigue. I’m supposed to take a supplement twice a day for three months.

Chi is from Japan. She is 32, but still plays with the enthusiasm and joy of a child. This is her first year playing in Korea. The only time I see her smile fade is when our training is slow or lazy. She turns to me to ask why. I make excuses for myself and my teammates: a long bus ride, a difficult schedule, the heat. She does not break her gaze. But…we are professionals, she says. 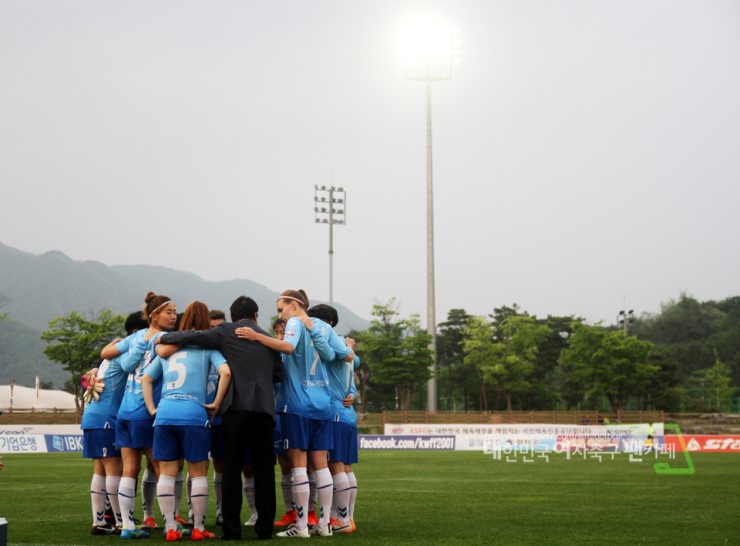 I think of an interview I heard with a player on the Borussia Dortmund team the day after their bus was tapped with explosives. The game they missed was controversially postponed for only one day. Our job now is to cope with this, he said. We must play in under 24 hours. That’s our job.

During summer in Korea it is difficult to distinguish between the beginning of rainfall and when the humidity is collecting in midair, condensing and depositing its own weather system on the field. At half time in the locker room we exchange our soaked-through uniforms and shorts for fresh ones.

Toward the end of the season I suffer from nerve pain that radiates down my left leg. It hurts most when I put on socks. I get an MRI, two X-Rays, acupuncture, cupping, I take pills, I take different pills. I rest for three weeks and then I am told that I must play in the next game. If we win, we will automatically qualify for playoffs.

Before the game I walk to a hospital next to our hotel with our team doctor. She speaks in Korean with the attendant, the doctor asks me a couple of questions and says something about doping.

I have to pay for these out of pocket. All up, it costs me seven dollars. I don’t ask what is in the shots. I get one in each hip. I am told they will last for about three hours, just until the end of the game.

I play in a state of numbness, I can’t feel anything and I’m slightly dizzy, drunk on the feeling of being pain-free. I score three goals and don’t remember any of them. My doctor gives me a thumbs up from the sideline. Korean injections are good, aren’t they?

In Korea, my mother watches me play professionally for the first time. After the game she smiles and hugs me. It’s funny, she says, I forget that I’m watching you do your job—I’m just used to watching you play soccer.

Georgia Cloepfil graduated from Macalester college in 2013. Since then, she has played professionally in Sweden, Australia and South Korea.