HomeStoriesThe Shape of a Dream Can Expand and Shrink: An American Soccer Life in South Korea, Part I

The Shape of a Dream Can Expand and Shrink: An American Soccer Life in South Korea, Part I 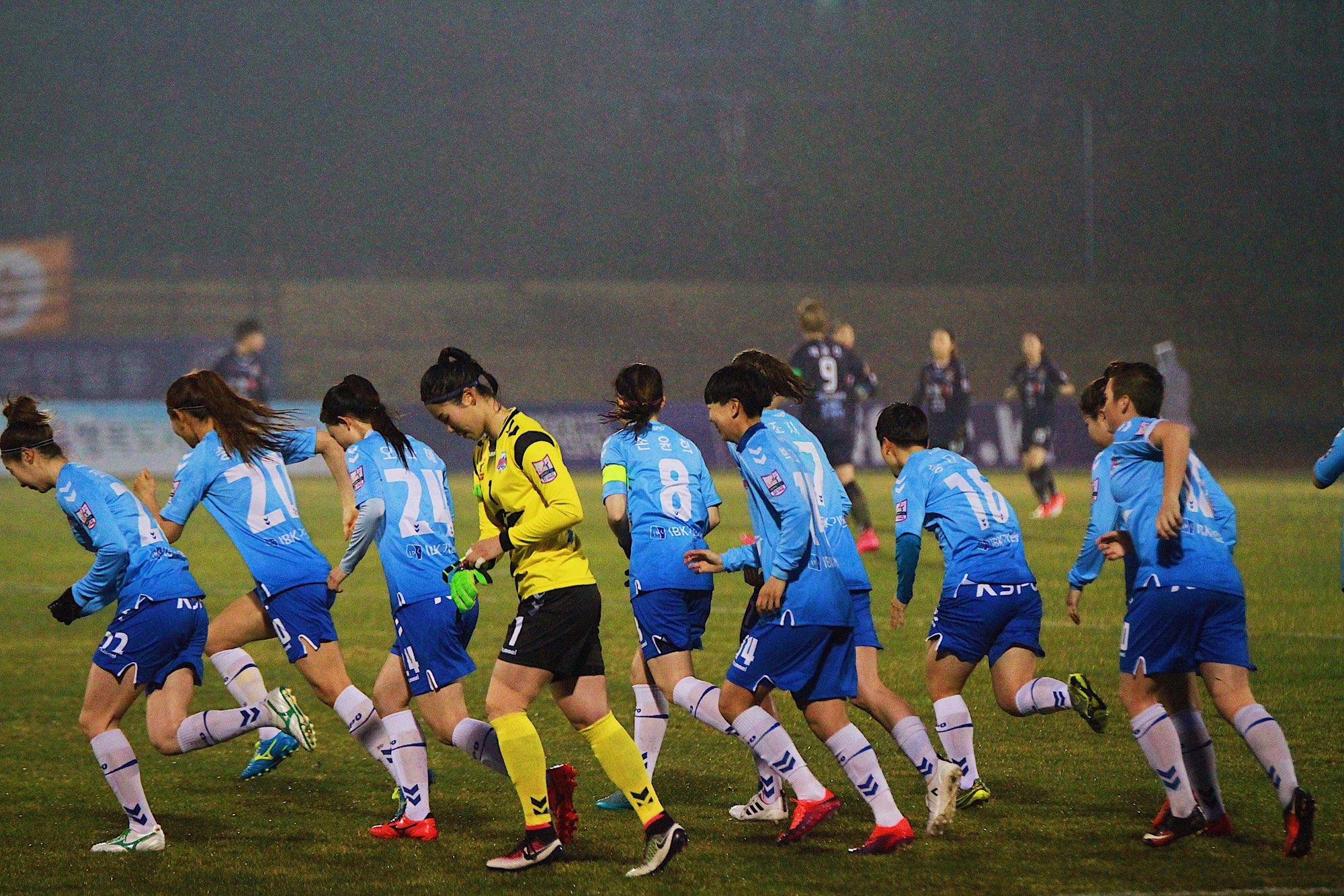 A glossary: apa, sick. chua, cold. baegopa, hungry. These are the first Korean words I learn.

I arrive in January. Snowplows clear our training fields on the Eastern coast of Korea. The subzero wind bites my naked hands and on the second morning a teammate gifts me a pair of her gloves. We live in a hotel for six weeks of pre-season. There is a sullen heaviness to our trainings, which are every day of the week, twice.

Himduro, they teach me: difficult.

For most of the season we live in Incheon, South Korea on a man-made island in the Yellow Sea. The waves reach the edge of our dormitory, which is secured by a gate and three security guards.

The tide recedes quickly and dramatically, leaving stranded boats and sometimes large cargo ships, stuck in the mud. From my room I watch their owners disembark and scour the ocean bottom for clams.

The fog here oppresses, partly because it is enigmatic. It is indistinguishable from smog, close partner in appearance and name. Some pollution blows across the ocean from Bejing and some of it I can watch wafting up into the sky across the bay from factories in Seoul.

When the sky is blue, it is blue only above my head, in a vertical strip. Most days the horizon is cushioned by a yellow-grey haze.

The guards bike in circles to patrol the area around the field and housing. Sometimes they fall asleep in the box where they sit near the entrance gate. I quickly learn which one to avoid completely and which one will wink and pass me hard candies across the desk when I bow to him on the way to breakfast.

During my first week the oldest one pulls me aside on my way out to the training field, proudly showing off the translation apps he has on his phone. He speaks into the microphone and his phone speaks to me: “What is your name?” I speak back, “My name is Georgia” and he smiles as he reads the transcribed Korean.

In South Korea, athletes give up most of their formal education at the age of 12. Starting then, their sport is their main focus. They often train three times a day. Upon graduation, female soccer players hope to secure a spot on one of the eight (now seven) teams that make up the professional league. Here they could make a more stable wage than is offered almost anywhere in the world to female players. 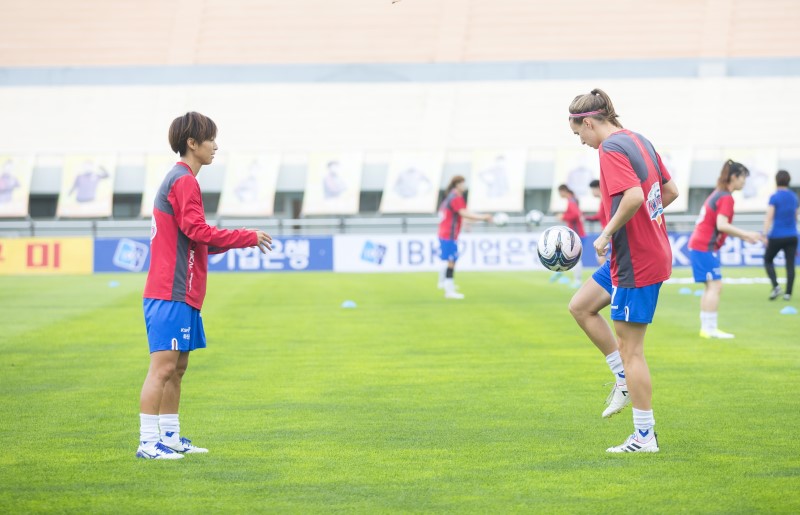 I spend my first few nights getting to know my new teammates. Via Google Translate, I ignorantly ask them what they studied in school. Only soccer. I ask what they will do after they stop playing. One teammate, 30, tells me that she might want to be a Pilates teacher. Everyone else says they haven’t given it any thought yet.

Seo-hyeon only plays, she tells me, because her father wants her to. “I like drawing, and reading books, I don’t really like soccer,” she says.

Su-Jung says she started playing soccer because it made sense financially for her family. Soccer has housed and fed her since she was 12 years old.

Min-seo is 29 and plays for the money. Her sister works in her parents’ restaurant and makes only $6 an hour.

Outside of training, we have much of the day to ourselves around the dorms, for individual training, for sleeping. We eat three meals a day together, boarding the bus every few hours to go eat at local restaurants. If I walk around with a backpack on I get asked “Where are you going?”, as though I might be escaping.

A college friend who lives in Seoul comes to one of my games. We are playing at the Hyochang Stadium, in the heart of Seoul. It can seat just over 15,000 fans. Tonight, it is raining. So the usually small crown is reduced even more. Maybe 50 people are scattered in the stands.

I find my friend after the game ends. She hugs me, congratulates me on the win, and then asks what it feels like to perform for no one, to play in an empty stadium, full of echo? Does it ever feel sad? 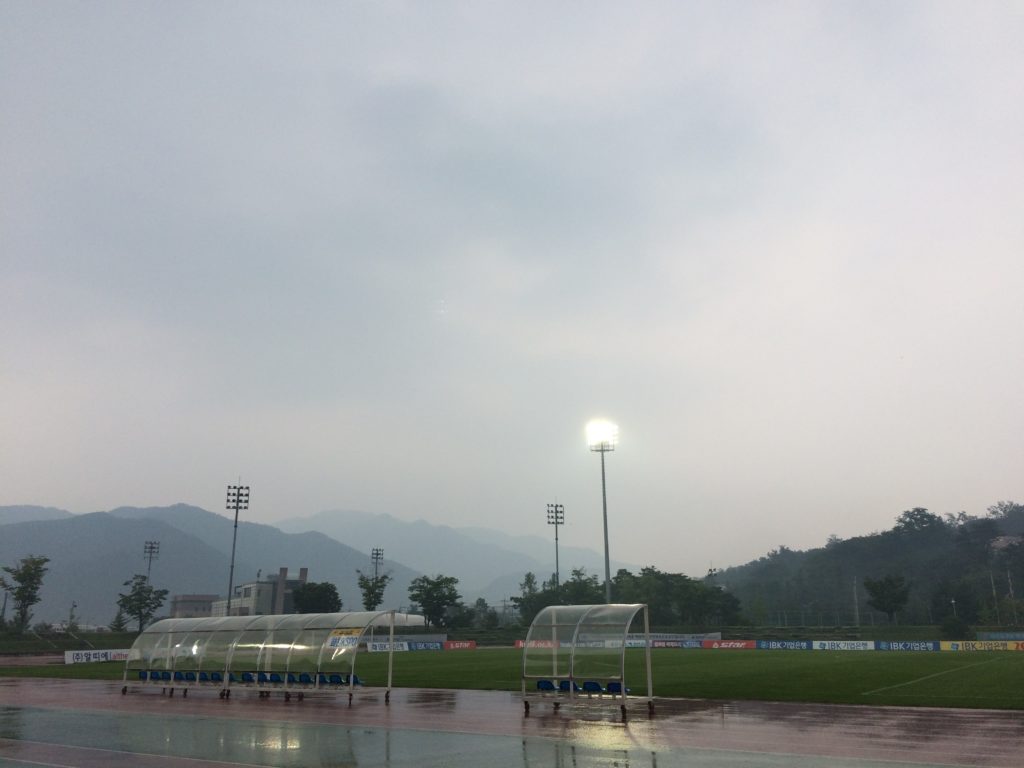 Love what you do and you’ll never work a day in your life.

In Korea, training is repetitive. Creativity gives way to rote technique and habit formation. Measures of progress are very small. The language barrier isn’t a problem during practice once I can remember all the patterns of our passing drills. My teammates are impressed by how quickly my confusion has subsided. But memorization isn’t language, doesn’t require any real understanding.

We play our home games in a town called Hwacheon, almost 3 hours from where we live. We wake in our hotel at 8:00 on the morning of a game, expected to walk and stretch our legs. It takes about twenty minutes to walk the entire perimeter of the town. The northernmost part of the area is only 9 kilometers from the Demilitarized Zone, the border between North and South Korea.

Much of the population of Hwacheon is made up of young soldiers. They spend their weekends in PC gamerooms, ferrying bags of beer from the 7/11 to their motels. They wave and say hello, practicing English and laughing as I walk by.

Our stadium is the smallest in the league. Come 7 p.m., when our games start, the young soldiers fill the grandstand. They cheer and clap and break my name down into a convenient 3 syllables that make up the Korean spelling on the back of my jersey: Jo-ji-ah.

Claire’s parents work together for a company that collects recycling from businesses. Since she started playing in Korea, she has made more money than them. But she is unhappy here. When she expresses her unhappiness, her father tells her to stick with it. The money is too good, and her life isn’t all that hard. “Do you like your job?” she asks him. “No.” “Why do you do it?” “I don’t have any other choice.”

Esther is from Haiti. She has been playing in Korea for three months when the club that signed her asks to terminate her contract. On her last night here, she tells me that she’s saved enough to support her family for at least the next two years. She is thankful. It is this duty that has brought her here to play.

My soccer coach during a couple of formative teenaged years, John, taught us how to Salsa dance at a tournament in Las Vegas and told us that he had once played professionally. I remember him saying that money had ruined it for him, money stopped it being fun for him. Money had cost him the companionship of teammates and the ease with which he had once played among them.

A shameful thought surfaces: when the fight is over for equal pay, what might we lose?

In the third grade my classmates and I wrote letters addressed to ourselves at age 25, or 30. I remember that I wanted to have two kids and name them Sam and Cara. It was less a dream than a plan. I can also remember writing that I wanted to be a professional soccer player.

Georgia Cloepfil graduated from Macalester college in 2013. Since then, she has played professionally in Sweden, Australia and South Korea.