A U.S. Soccer Keystone: Beadling S.C., Then and Now 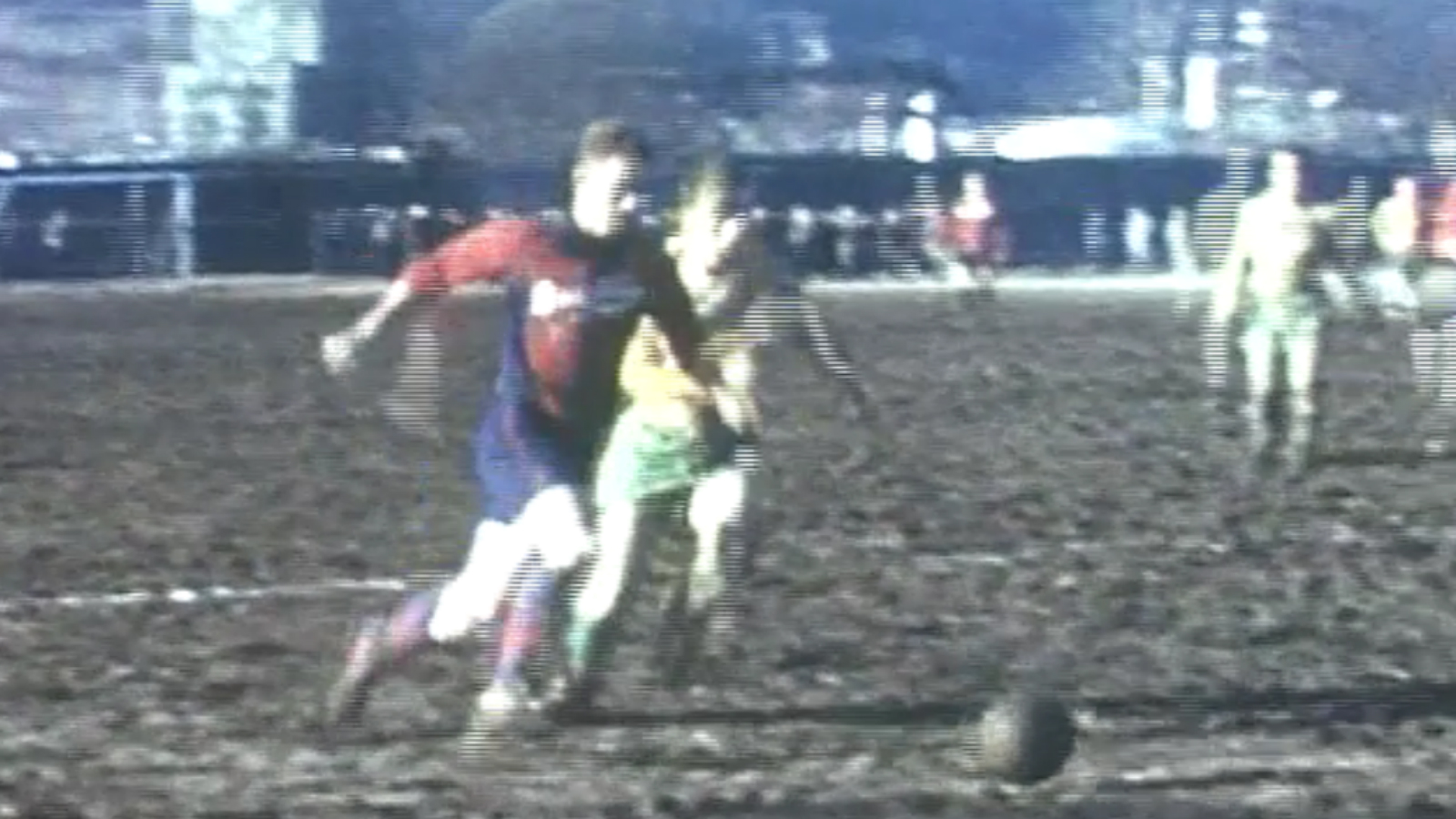 Five generations of the Kohlmyer family have donned the colors of Beadling Soccer Club, a team ensconced in western Pennsylvania. It’s in an area not traditionally viewed as a hotbed of American soccer. Just four current Major League Soccer players hail from Pennsylvania—though one significant current U.S. international, Christian Pulisic, was born there.

But over the years, there have been plenty of professional players and collegiate players that started with the U.S.’s oldest active soccer club: Beadling S.C.

“It was just one of the things you did in Beadling,” said Denny Kohlmyer, the club’s current president and third of five generations to play for Beadling, when asked about the importance of soccer in the community. “Even though I played baseball and wrestled, soccer was just the main thing you did.”

The team has been active since 1898, when it was created by an influx of European immigrants working in the local Harrison mine. Joseph Luxbacher was one of those immigrants, and considered one of the driving proponents of the early club.

His grandson Joe, who played for Beadling and also enjoyed a successful 30-year career as the coach of the University of Pittsburgh men’s soccer team, admits his grandfather wasn’t the most talented soccer player—but did have a desire to create an athletic outlet for the town’s citizens.

Joseph Luxbacher, nicknamed “Mr. Soccer,” founded the Beadling Sportsmen’s Club that grew to include the soccer club, and was a fixture of both the playing and coaching sides for roughly 60 years.

The club carries its name in a tangential way from the local mine. The Harrison mine, ostensibly named for the U.S. president, came to be known colloquially as the Beadling Mine, after the three brothers who owned it. That name would eventually extend to the town built around it.

Fifteen years after the mine first opened, the town had its own team: Beadling Soccer Club.

In a team photograph taken in 1898, men in crisp shirts (with the occasional tie), rolled-up slacks and long wool socks smile for the camera. By the early 1900s, the haphazard collection of shirts would be replaced by a dark, long-sleeved shirt with a “B” emblazoned in the middle.

The club wouldn’t play in an organized league until 1911, when it joined the Pittsburgh Press League (nicknamed the Miners League due to the employment of its participants), so named because local newspapers and companies helped support players. Company management was known to headhunt players in surrounding areas in a bid to bolster their squads. 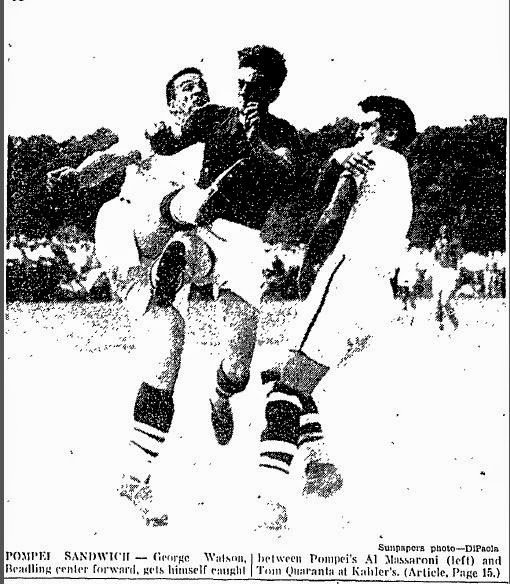 “Everything shut down when you played on Sunday or it was a national championship game,” says Kohlmyer. “There were 200 to 350 people in the community and you’d get 3,000 people to watch the game.”

By 1921, the club had joined the Keystone League, which would become the dominant league for the next several decades, and began making deep runs into the National Amateur Cup as well as forays into the National Challenge Cup, the forbear to the modern U.S. Open Cup.

The Kohlmyer influence on Beadling is tied to arguably its greatest success. Kohlmyer’s father, Jim, was part of the regionally famous 1954 team that won the National Amateur Cup, beating the St. Louis Simpkins-Ford club that was famous for the number of its players who played for the U.S. team that beat England at the 1950 World Cup. The club is from the smallest community to have ever won an American national championship.

As time has passed, the club shifted its attention away from men’s teams driving its development to youth teams. The club had junior teams as far back as the 1930s, but it was simply that: teams for players who weren’t old enough to make the senior team.

Kohlmyer and his brothers played for the club, and his mother even worked as the club secretary during the late 1960s. By the late ’70s, Kohlmyer was working with the Pittsburgh Spirit of the Major Indoor Soccer League, in charge of youth development and began formulating a plan to revamp the system both for the Spirit and for Beadling. It started, he says, with a push for the club to have a “selects” youth team, one that would look to recruit all the best players in western Pennsylvania.

“There was a need,” he says, adding the transition to focusing on youth development wasn’t tough. “Everybody who was a good player wanted to be on a good team. Not just be a good player on a bad team. When you start harnessing all the best kids, it’s easier.”

Kohlmyer says the club has grown from there. It started with one U19 team in the mid-1970s and by 1978, Beadling had a “selects” youth team at most age levels. “We just started with a U19 team because that was all we had. Then we started with a U17 team, with a focus on building teams in two-year increments,” he said. 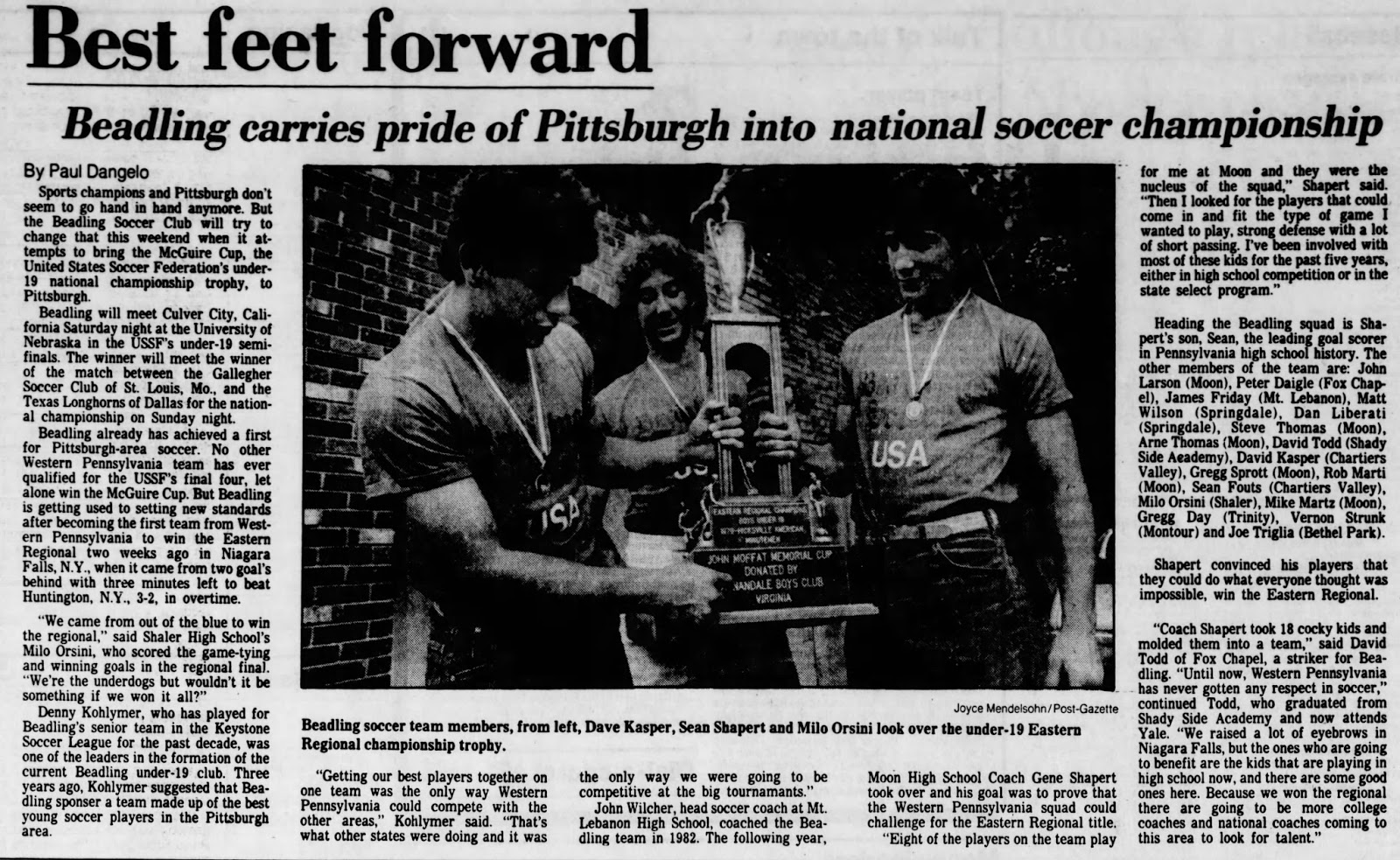 Now the club has 700 players, from seven-year-olds in their academy program to their elite youth teams. Kohlmyer laments the rise in cost of playing youth soccer as well as the extreme number of competing leagues.

“I think the biggest thing right now is the wide variety of leagues out there. It puts people like me, who are directors, in a tough position trying to figure out the best way for your club,” he said.

He’s cognizant of the financial pressure his decisions place on parents, and works to make sure there’s no mentality of “keeping up with the Joneses.” “I feel for the parents, I really do. We try to keep our costs as minimal as we can but if you want quality coaches you have to pay them,” he says.

Luxbacher says the evolution and growth of the club is a very different experience from what he grew up with.

He started playing in the 1960s as a child and would continue through his time at the University of Pittsburgh and during his stint as a professional player before hanging his boots up in the 1980s due to knee injuries. 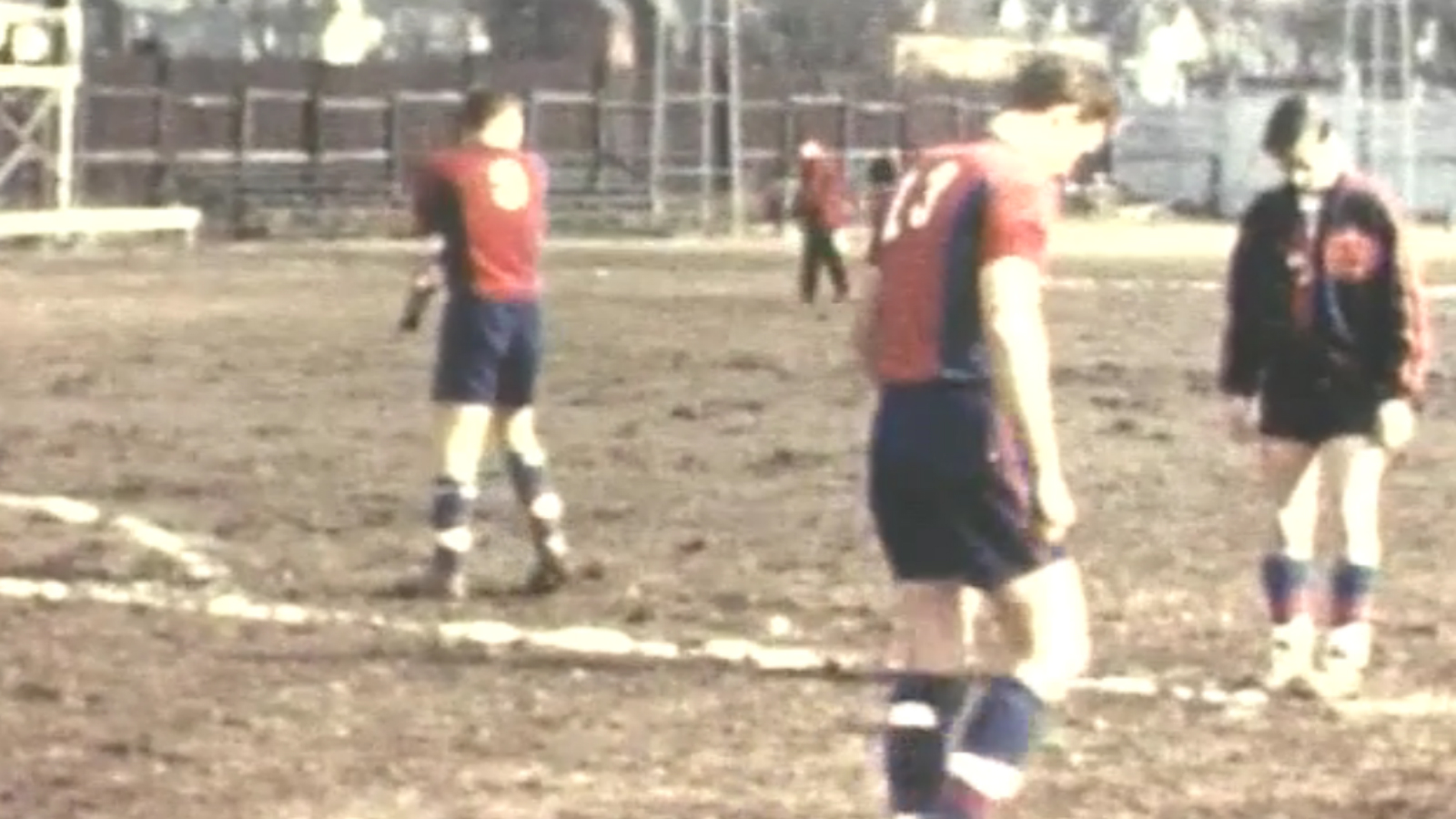 “I don’t think there’s the same feeling today as there was then, that we were playing for Beadling,” he said. “I played pro and all that stuff but some of my best memories are playing with my buddies for a dozen years. Every year, we were the same guys and the same team. It doesn’t really happen anymore.”

But Kohlmyer says staff work hard to make sure the kids, who can come as far away as Ohio and West Virginia, understand the history and institution they represent. “One of the things we emphasize is the history of the club: what you’re playing for, who you’re playing for and the name on the the jersey,” he says. All the new youth players are taken in to the clubhouse, past trophies dating back to the 1900s and rows of photos of prominent Beadling players.

The same spirit that kept the club alive for all these years is still being replicated today. “In our program, we have kids I coached bring their kids back to play, which I’m proud of more than anything,” Kohlmyer says.

Nick Wells is a Canadian journalist from Vancouver, B.C. His work has been published in newspapers across Canada, CTV News, In Bed With Maradona, and Unibet.