When England got Nevilled in the Euros 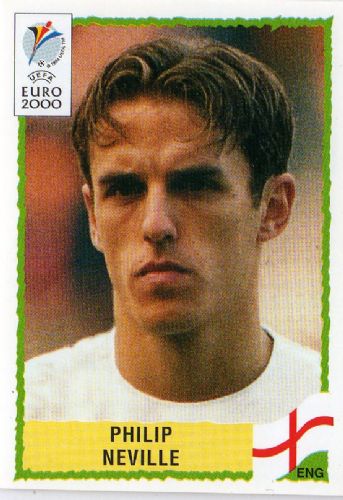 On 20 June 2000, Romania humbled England, eliminating them from the European Championship with an 89th-minute penalty kick.

England have traditionally struggled in the Euros, advancing out of the group stages only twice from 1964 to 1996 (and failing to qualify for four of those tournaments). But they made it to the semifinals in 1996 before losing on penalties to Germany and were looking to improve on that showing in 2000. Although they lost their opening group stage match to Portugal, they beat Germany and needed only a draw against Romania to advance to the quarterfinals.

Playing before a crowd of 30,000 at the Stade du Pays de Charleroi, Romania took the lead with a 22nd-minute goal from defender Cristian Chivu, whose attempted cross missed its target and instead found the top corner of the net. But England scored twice before the break, first after a Chivu foul on Paul Ince resulted in an Alan Shearer penalty kick (41′), then when Michael Owen found the net four minutes later.

Midfielder Dorinal Munteanu equalized three minutes after the restart and England appeared content to play for the draw. In the 89th minute, though, Romanian striker Viorel Moldovan charged into the England box and was brought down by left back Phil Neville. The referee awarded the penalty and substitute Ioan Ganea converted it with ease. The kick sent England home and put Romania through to the quarterfinals, where they lost to Italy, 2-0.