HomeStoriesPer Mertesacker and the joys of awkwardly tall footballers

Per Mertesacker and the joys of awkwardly tall footballers

It’s all gone Per shaped 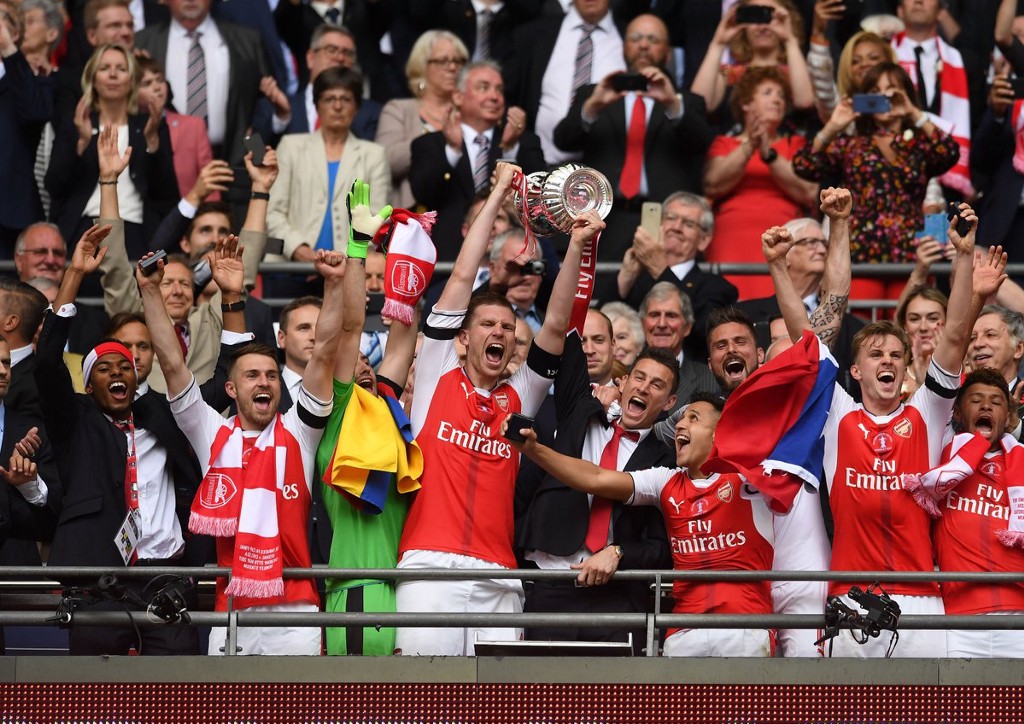 Per Mertesacker, the Arsenal defender who had played 37 minutes of competitive football in the last 13 months before starting and winning the FA Cup, celebrated by sharing an ungainly hug with a fan. It was Peak Per™: at once winning and awkward; the jolly German giant.

Among Arsenal fans, Mertesacker is known as the BFG. Look away now kids; that acronym stands for big fucking German. The nickname is endearing but fundamentally misunderstands the World Cup winners’ gifts. He is tall, sure, but mainly in the sense that he can be spotted in a crowd. That’s a distinction, but it’s not really the physical menace big is meant to connote. As for the F, it overstates the extent to which Mertesacker is an enforcer. Because Arsenal’s teutonic stringbean of a defender is not a backline playmaker, it is inferred that he’s a destroyer when, in point of fact, he’s simply slow. Yes, he’s German. More than anything else clips of his career reveal a goofy and tall defender who is known for engaging in awkward dances.

The case of Per Mertesacker’s misdiagnosed assets reflects a broader problem in football, especially its English variant: in the age of the small, twinkle-toed creator, we have lost the ability to discuss alternate body shapes and the assets they connote. This is particularly the case when it comes to players who are tall but not big — your Peter Crouches and Per Mertesackers. Body-type essentialism is depriving fans of their chance to properly appreciate these characters.

Body typology, in sports more than anywhere else, is destiny. An absurd percentage of men taller than seven feet, for instance, wind up playing professional basketball. Being tall is often an asset in this regard. That is less obviously the case in football, where tiny schemers are often the most valuable, but height is still an asset for battering-ram forwards, goalkeepers, and imposing aerial defenders.

Height, in this context, is conflated with overall size. The running assumption is that tall players have filled out in other ways, that they are muscular and imposing archetypes like Andy Carroll or John Terry. Some players are just tall. Peter Crouch looks like a normal human who was placed in a taffy-stretcher. Like Mertesacker, he has the awkward disposition of a pubescent teen whose body and comportment has yet to adapt to a sudden growth spurt.

Mertesacker and Crouch are now at the tail end of their careers, but still suffering from the expectation that they’ll eventually fill out and play to type. Crouch, who has suffered from playing under Tony Pulis at Stoke and in some dire England sides, will always be thought of as a target man and a header of the ball. Such a characterization does a disservice to his footwork and uncanny ability to knock in goals off all parts of his body and often from strange angles. A proper appreciation of Crouch would prioritize his awkwardness over his height. The BFG, likewise, is not so much imperious in defense as he is capable of just getting the job done; he throws his trunk or limbs in front of attacks and often gets the job done.

Being uneasily effective is a marketable skill. Mertesacker and Crouch are still around at an advanced age. Stoke in particular keeps coming back to Crouch after trying to replace him in the transfer market. He scored his 100th Premier League goal this year. A local company celebrated the occasion with a tall mug. Crouch, meanwhile, has developed into one of the funnier footballers on Twitter and remains a highly entertaining dancer. Like Mertesacker, his size is a source of comedy as opposed to power.

Crouch and Mertesacker often appear to be in on a joke that much of football culture has yet to understand. When they retire, they’ll likely still be associated with strengths their bodies never really delivered; their physical gifts were more ambiguous than adults waiting for one last growth spurt might want to concede. For players, this sort of expectation could easily be frustrating. Football is littered with physical specimens who never made peace with their bodies and moved around in search of their natural levels.

Humor is central to the Crouch and Mertesacker experience. Football wants players of their ilk to be deadly serious; shorter players or those with flamboyant appearances get to be the class clowns. It is neither accidental nor incidental that both players are goofballs. A certain amount of public attention—wanted and otherwise—comes with an unusual body type. That attention can be crushing. Comedy and performance that accentuates length, then, is a sign that these ungainly tall players are at peace. If accuracy is what matters, football fans would do well to call Per Mertesacker the Big Funky German.