HomeStoriesEderson demonstrates how saving penalties is more skill than luck

Ederson demonstrates how saving penalties is more skill than luck

In the 52nd minute of Thursday’s Premier League match between Arsenal and Manchester City, Arsenal were getting pummeled 3-0 when they were suddenly given a lifeline in the form of a penalty kick. If Arsenal were to score here, the momentum of the match could change and they could have a chance to get themselves back in the game. Pierre-Emerick Aubameyang elected to take the shot.

As Aubameyang set the ball down to take the kick I turned to my wife and said, “I promise you Ederson will save this.” When Aubameyang struck the ball and subsequently had it saved by Ederson, I turned to her and proudly said, “I told you so”, as if she actually cared about the outcome of the penalty at all. I sat there smiling as if I was some magical fortune teller; she just sat there and rolled her eyes at how full of himself her husband was.

Many think penalties are a crapshoot for goalkeepers, and that when they make a save it’s due to a good guess or luck. We’ve all heard it before from the commentators, “Good save by the goalkeeper as he guessed the correct way.” I cringe every time I hear this because in reality, saving a penalty is just as much of a skill set as being good at breakaways, your distribution, or your shot stopping. That is why you see goalkeepers all over the world who consistently excel at saving penalties (examples: Samir Handanovic of Inter and Diego Alves of Flamengo, formerly Valencia—both have close to a 50% save success rate on more than 50 penalties faced). That’s not down to luck, that’s a skill set.

I’ll acknowledge that you can never be completely sure before the ball is kicked where it will go, as none of us are mind readers. But there are most definitely clues that you, as a goalkeeper, can gather from the shooter that can help tip their shot before it is taken, and move the odds of making a save in your favor.

As Aubameyang set the ball down on the spot, Ederson was instantly engaged in trying to pick up any clue as to where Aubameyang would shoot. Just to give you an idea of the type of things Ederson would have been looking for: he would be paying attention to the way Aubameyang placed the ball down, where his eyes were looking (or not looking) at the goal, and his approach to the ball.

In this specific case, Aubameyang started to tip his hand on where he would shoot almost immediately. This was all down to one simple tell: his starting position and approach to the ball.

When taking a penalty the striker will use his approach to create the angle needed to strike the ball accurately to his preferred target. If Aubameyang wanted to swing the ball to his left, he would need to create an angle in his run to allow him to do so. He would have to take a starting position (or loop his approach) at about a 25-30 degree angle that would allow him to attack the ball from the side while being able to swing his hips, leg, and foot through the ball with power and accuracy. And if he wanted to push the ball to the right corner, he would want to take a more direct route to strike the ball that would allow him to open his hips and shoot with the inside of his right foot.

After Aubameyang placed the ball down, he backed up in a straight line behind the ball and waited for the referee to blow his whistle. This was a strong clue for Ederson that Aubameyang was going to shoot to his right (Ederson’s left) side and try to open his hips and push the ball. In order to shoot to his left (Ederson’s right) in this situation, with such a tight angle/approach to the ball, Aubameyang would need to swing his hips at the last second to strike it past a diving Ederson. Could he do it? Yes, but it is a difficult task to pull off with power and accuracy, even for one of the best strikers in the world. Ederson is aware of all of these things before Aubameyang shoots and they help give him the ability to anticipate the destination of the forthcoming shot.

Once the referee blew his whistle, Aubameyang decided to alter his approach to the ball slightly as he took one step to his left before attacking the ball. You see strikers do this sometimes to try and trick the goalkeeper and get him to move early, or to even disguise his shot attempt—especially when having such a straight approach to the ball. Another trick that strikers sometimes use is to fluctuate the speed of their run up to the ball (we saw this from Heung-min Son earlier in the week in Tottenham’s FA Cup win over Rochdale).

Ederson wasn’t having any of it and wasn’t about to fall for a slight movement from Aubameyang. He stood his ground, stayed patient, and waited to pounce on the shot (take a look at the picture below to understand the importance of standing his ground and keeping his weight distributed evenly throughout his body). If Ederson dove early, or started to lean his body in either direction before the shot was taken, then Aubameyang could just dink the shot softly to the other side or down the middle for an easy goal. This is something the best penalty kick takers are so good at—watching the goalkeeper’s movement and being able to adjust their shot if the goalkeeper moves early (think Messi). That is why it is so vital for goalkeepers to stay patient and not move until the absolute last second before the ball is struck. This is one of the most difficult things for goalkeepers to do in penalty kick situations, especially when you feel you’ve got a good read on the shot. Patience and the timing of the goalkeeper’s dive are so crucial in penalty kick situations. Ederson excels at this here.

As Aubameyang set his plant foot down on the ground and pushed open his hips to strike the ball, Ederson then 100% knew the final destination of Aubameyang’s shot and that all of his previous work in reading his approach was about to pay off. From a goalkeeper’s perspective, there aren’t many better feelings you get on a football field than this right here; knowing you read the striker correctly and are about to save his penalty. Now it was Ederson’s time to shine.

The ball was hit with a good pace and down to the right corner, but Ederson was all over it and pushed the ball out to safety. A strong read and save from Ederson. 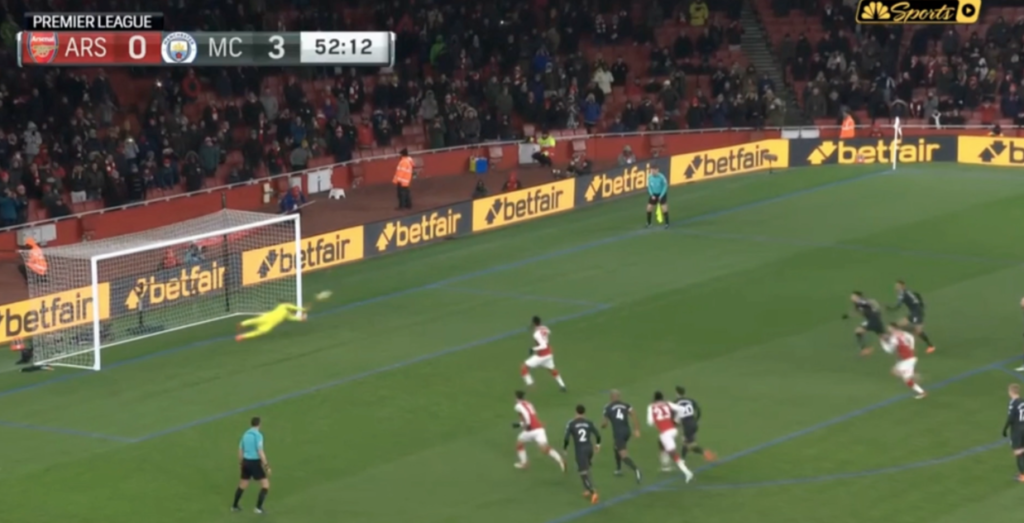 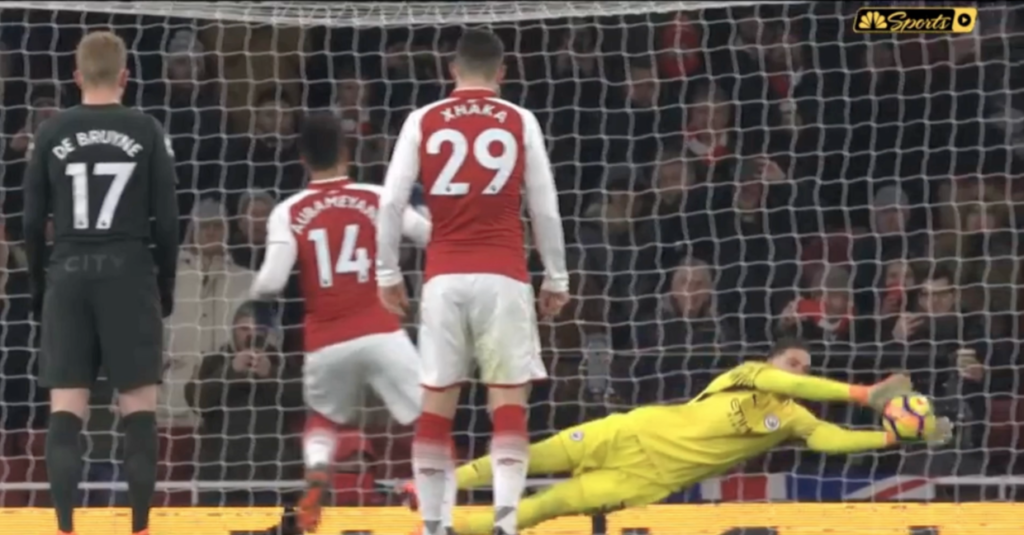 It was a fantastic penalty read and save from Ederson that crushed any hope of a comeback Arsenal may of had that allowed City to go on and win comfortably 3-0. It also served as another psychological blow to a club currently in a tailspin as Arsene Wenger’s grip on Arsenal loosens by the day.